'Sridevi Will Always Be Missed:' Anil Kapoor Remembers Actress Ahead Her Of Death Anniversary

A puja to remember Sridevi was held in Chennai on Thursday 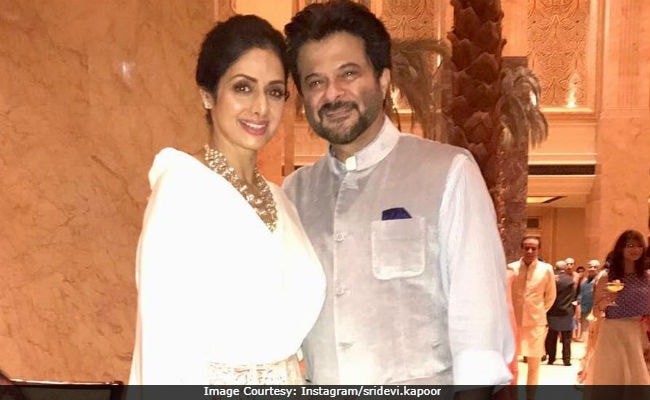 Actor Anil Kapoor remembered his sister-in-law Sridevi (also his co-star of several films) ahead of her first death anniversary and recently told Mumbai Mirror that "she will always be missed." A puja to remember the late actress was held in Chennai on Thursday, which was attended by Sridevi's husband Boney Kapoor, daughters Janhvi and Khushi and also Anil Kapoor. "She was my brother's wife and my wife's friend as they connected really well. Whenever we met there was always fun, laughter and humour. People like Sri ji are difficult to forget. Her body of work is fabulous and inspiring. Her films are still being seen and pictures still being published everywhere. She will always be missed," Anil Kapoor told Mumbai Mirror.

Sridevi died on February 24, 2018 in Dubai, where she was attending a family wedding. She was 54. Thursday marked Sridevi's death anniversary according to the tithi, Mumbai Mirror reports. Apart from the family members, the puja was attended by actor Ajith Kumar, his wife Shalini, Sridevi's English Vinglish director Gauri Shinde and her filmmaker husband R Balki.

Sridevi and Anil Kapoor co-starred in films such as Mr. India, Lamhe, Laadla, Roop Ki Rani Choron Ka Raja and Judaai, which was their last project together. After Judaai, Sridevi had made a comeback with 2012's English Vinglish and 2017's MOM was her last film, for which she won a National Award (posthumously).

Sridevi and Boney Kapoor married in 1996. Janhvi debuted in Bollywood with 2018's Dhadak. She is the couple's elder child.