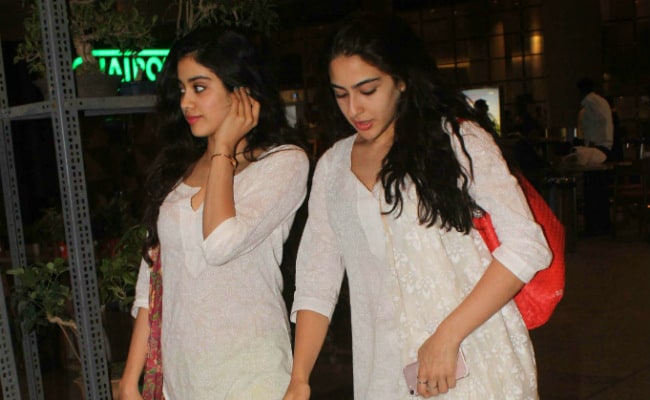 Jhanvi and Sara are great friends

New Delhi: It's been a while that Sara Ali Khan has been shooting for her Bollywood debut while Jhanvi Kapoor's maiden acting project is to go on floors next month. Sara scored Abhishek Kapoor-directed Kedarnath, co-starring Sushant Singh Rajput while Jhanvi is being launched in Bollywood in a Karan Johar-produced movie. Is there a latent sense of competition between the aspiring contemporaries? "Competition can never be eliminated from this industry," Jhanvi's superstar mom Sridevi told mid-day in an interview. Jhanvi and Sara are couple of years apart - Sridevi's elder daughter is 19 while Saif Ali Khan's daughter celebrated her 24th birthday in September this year.

Even before the Jhanvi and Sara, who are great friends BTW, have made their first movies, debates are already on between Camp Jhanvi and Team Sara, primarily about comparisons between the two. Needless to say, comparisons will be drawn once Kedarnath hits screens next year and Dhadak (as Karan Johar's film is reportedly titled) will release eventually and this is what Sridevi has to say about the star kids being pitched against each other: "Competition can never be eliminated from this industry. There is nothing wrong with it. It keeps you on your toes, making you work harder. But, the biggest challenge lay in bettering your craft, and faring better than you did the last time," reported mid-day.

Reports about Jhanvi's debut project also suggest that her film may be ready for release by mid-December next year while Kedarnath is scheduled to arrive on screens on December 21. This means, even though it goes on floors in December, Jhanvi's debut may release before Sara's Kedarnath. Jhanvi co-stars with Shahid Kapoor's brother Ishaan Khattar in the movie, which is a Hindi remake of critically acclaimed Marathi movie Sairat.

"You don't have to turn your face away from each other just because you are pitted against one another at work," she added. And surely, Jhanvi and Sara do not - they are hang-out pals and are often spotted chilling together at showbiz parties, late night outings and even travelling together.

Promoted
Listen to the latest songs, only on JioSaavn.com
Earlier in an interview with news agency IANS, Sridevi said Jhanvi is well aware about the challenges she's going to face: "She has chosen this path and profession, and I have been in this industry for long. So I am mentally more prepared than her. She has been watching me, and knows what she is getting into. Nothing is going to be a cakewalk in any profession. So you have to work hard, and there will be challenges. I'm sure she is ready for it."

While Sara and Jhanvi, best of friends, are ready to take over Bollywood, we simply can't wait to see them on screen.