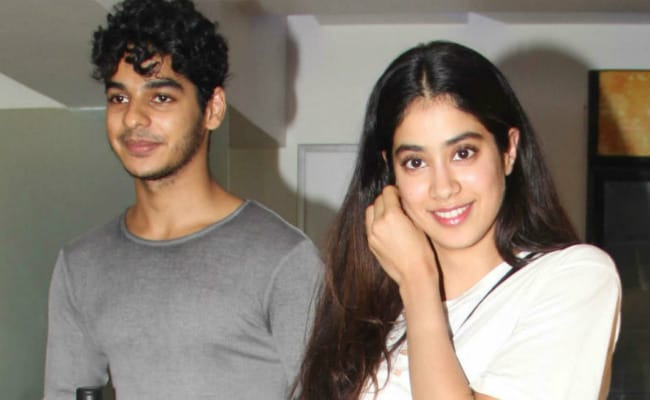 New Delhi: It's a good day for Jhanvi Kapoor fans! It's finally here - the big announcement about Jhanvi Kapoor's much awaited and much speculated Bollywood debut. The Hindi remake of the critically acclaimed Sairat is what Sridevi's elder daughter will introduce herself in Bollywood with. Joining her on the cast is Shahid Kapoor's one-film old brother Ishaan Khattar, reported trade analyst Ramesh Bala. That's just not it, he went on to share updates about the movie - the shoot is to begin in December and the movie is co-produced by Karan Johar. Sharing the big news, this is what Mr Bala tweeted on Monday: "Jhanvi Kapoor and Ishaan Khattar starrer Hindi remake of Marathi Blockbuster #Sairat will go on da floors from Dec 1st... Karan Johar co-prod."

Sairat, released on 2016, is the first Marathi film to have scored over Rs 100 crore.

IRL, Jhanvi Kapoor, 18, and Ishaan Khattar, 22, are friends and are often spotted at showbiz parties and movie dates together. They were recently spotted hanging out together at Deepika Padukone's success party for Padmavati. Sara Ali Khan, who is making her Bollywood debut with Abhishek Kapoor's Kedarnath, Ranveer Singh and Karan joined the two for picture.

Of the contemporary aspiring star kids, the announcement about Jhanvi's debut arrives couple of months after Sara's maiden movie went on floors and Ishaan has already featured in Iranian director Majid Majidi's Beyond The Clouds, which released abroad earlier this year. Ishaan has also featured in a blink-and-miss role in Shahid Kapoor's critically acclaimed drug drama Udta Punjab.

Promoted
Listen to the latest songs, only on JioSaavn.com
Earlier this year, Sridevi had dropped a major hint about Jhanvi's debut project in an interview with DNA, saying: "Yes, Karan has been talking to us about a film for Jhanvi and we've given consent. But we don't know which project it would be. Since Karan has recently acquired the remake rights of Sairat it is being presumed that our daughter would be launched in this project."

Ahead of the big reveal, speculation about Jhanvi's first stint in Bollywood also mentioned a probable Hindi remake of Fault In The Stars, expectedly produced by Karan Johar and directed by Shashank Khaitan.