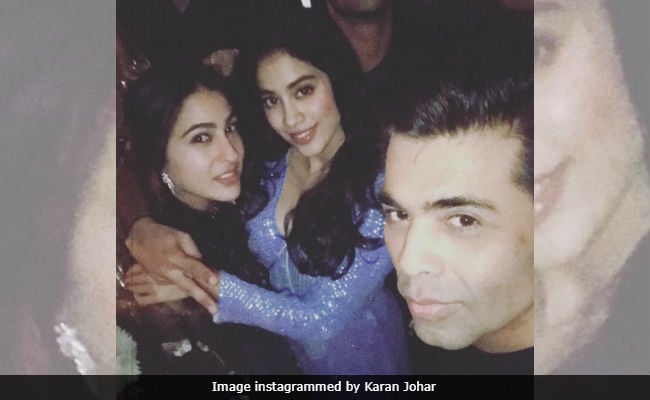 New Delhi: Sara Ali Khan (daughter of Saif Ali Khan and Amrita Singh) and Jhanvi Kapoor (daughter of Sridevi and Boney Kapoor) bonded at actress Deepika Padukone's party on Saturday night, to celebrate the success of the trailer of Padmavati. They struck a pose which was captured by 'repititive poser' Karan Johar, who like always shared inside pictures from Bollywood's elite party circle (thank you, KJo). Jhanvi, whom Karan will launch in the remake of Sairat, was dressed in a full sequined dress while Sara, who is filming her debut film Kedarnath, looked chic in a black embroidered top. Karan johar shared the picture and captioned it: "Jhanvi and Sara strike a pose and I do what I do in every photo! Am a repetitive poser!"

Jahnvi and Sara strike a pose!!!!! and I do what I do in every photo! Am a repetitive poser!

Karan Johar shared another picture from the Saturday night party in which the trio was joined by Ranveer Singh and Ishaan Khatter. Karan has reportedly signed Ishaan for Sairat remake opposite Jhanvi. Ishaan, brother of Shahid Kapoor, debuted in Iranian director Majid majidi's Beyond The Clouds this year. Karan captioned the picture: "The young ones! The star one and the me!"

Promoted
Listen to the latest songs, only on JioSaavn.com
Deepika hosted the grand party to celebrate the success of the trailer of Padmavati, which releases on December 1. Ranveer Singh stepped up with a big smile quashing break-up rumours like a boss. Actors Shah Rukh Khan and his wife Gauri, Alia Bhatt, Sonakshi Sinha, Athiya Shetty, Sidharth Malhotra were also on Deepika's big bash. However, Deepika's co-star Shahid Kapoor gave the party a miss as he was out of town.