Which 'Sairat' vs 'Dhadak' meme made you laugh the loudest? 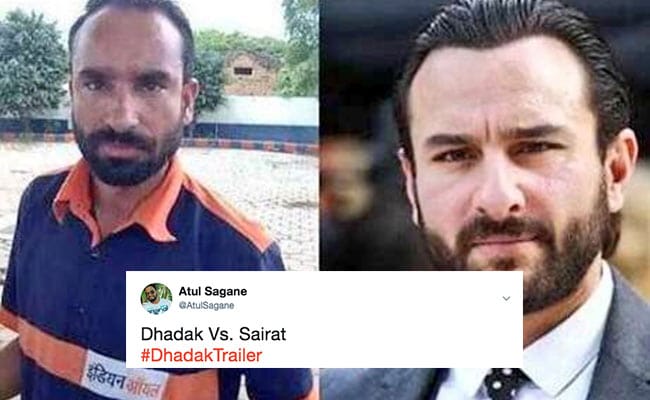 The 'Dhadak' trailer has inspired a lot of memes and jokes.

The trailer of Janhvi Kapoor and Ishaan Khatter's much-awaited Bollywood debut Dhadak dropped yesterday amidst much fan-fare. Dhadak is a remake of the 2016 Marathi superhit film Sairat, albeit on what appears to be a much glossier canvas, thanks to Karan Johar's Dharma Productions touch. In such a scenario, comparisons with the original are inevitable. Though many praised the trailer and the two leads, others found it to be lacking when compared to Sairat.  That is why, Sairat vs Dhadak memes have taken over Twitter in the last 24 hours.

The memes use two pictures to compare the two movies, along the lines of the "expectations vs reality" format. We found the best Sairat vs Dhadak memes doing the rounds of the Internet, take a look:

Even without Sairat comparisons, people found plenty to joke about after watching the Dhadak trailer

"I saw Sairat with mom at home and I remember telling her 'I wish that this was my first film and I could do something like it'. Me and mom had this big discussion on how she wanted a role like this for me and then you (Karan Johar) called and it happened," Janhvi is reported to have said by PTI.

While Dhadak is Janhvi Kapoor's debut film, Ishaan Khatter has previously appeared in Majid Majidi's Beyond The Clouds. Dhadak is directed by Shashank Khaitan and will hit the big screens on July 20.

"My Pancreas Ate Itself": UK Man Admitted To Hospital After Chugging 12 Energy Drinks In 10 Minutes