Spot Malaika Arora In Pic Of Arjun Kapoor And His Family - Sonam, Anand And Rhea 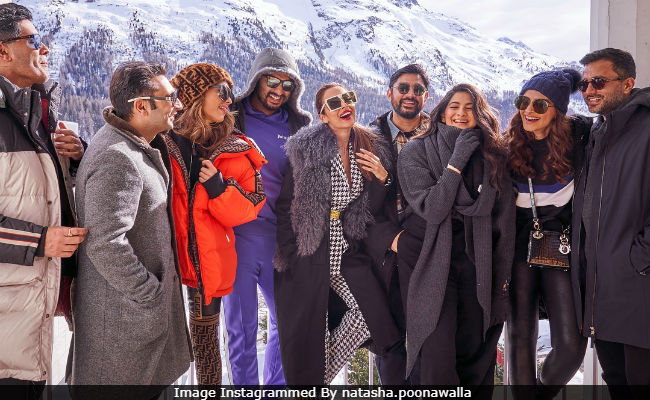 On Wednesday morning, we chanced upon a picture posted by socialite Natasha Poonawalla, which she shared a day late to wish film producer Rhea Kapoor on her 32nd birthday. The picture appears to be taken in Switzerland, where most of the Bollywood celebrities were invited to Akash Ambani and Shloka Mehta's pre-wedding party. Rumoured couple Arjun Kapoor and Malaika Arora, Sonam Kapoor and her husband Anand Ahuja, fashion designer Manish Malhotra, Rhea's boyfriend Karan Boolani and Natasha Poonawalla's husband Adar also feature in the picture posted by her. "To many more giggles, dress-ups, healthy meals and ragers! Happiest birthday, Rhea Kapoor," Natasha Poonawalla wrote.

Arjun is Sonam and Rhea's cousin and he is reportedly dating Malaika Arora, who is standing beside him in the happy picture. Take a look.

Malaika Arora and Arjun Kapoor haven't admitted that they are dating. However, their comments on each other's Instagram posts, pictures from their dinner dates and outings speak volumes. Recently, on Koffee With Karan 6, Malaika said, "I like Arjun, this way or that way." On the Koffee couch itself, Priyanka said that "she knows Arjun and Malaika are dating."

Meanwhile, over the weekend, Malaika Arora and Arjun Kapoor trended big time after several unconfirmed media reports stated that they might get married in a Christian wedding ceremony in April.

On the work front, Arjun Kapoor is currently making Panipat and Sandeep Aur Pinky Faraar and India's Most Wanted are his upcoming films.