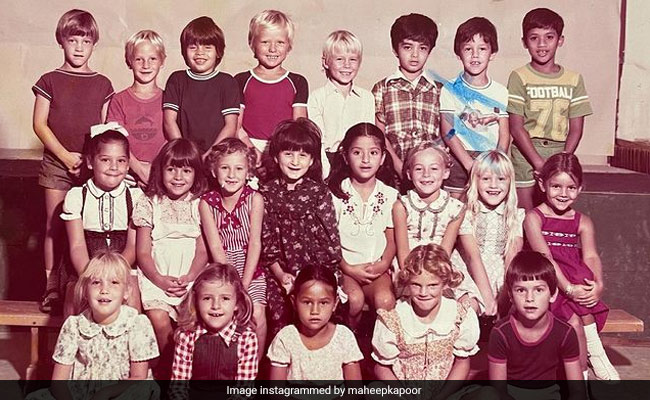 Maheep Kapoor, who is the wife of actor Sanjay Kapoor, on Tuesday, went down memory lane and shared several pictures from her school days on Instagram. Among other pictures, Maheep shared four different class photographs from her school days. She also shared three solo pictures of herself from her childhood. While one picture features Maheep Kapoor with her hair tied in two ponytails, other two feature her with her hair tied in two plaits. Maheep can be seen wearing an adorable smile in all three pictures. Sharing the pictures on Instagram, she asked her Instafam if they can "spot" her. "School pictures! Can you spot me?" she wrote in the caption of the post.

Maheep often shares new and old pictures on social media. Last week, she shared a picture each of herself and Sanjay Kapoor. The picture seems to be from one of the couple's early date nights. They can be seen holding a glass each of a cold beverage. "My glass is brimming... so is his," Maheep wrote in the caption.

Maheep Kapoor is a jewelery designer by profession. She recently starred in Karan Johar's Netflix series The Fabulous Lives Of Bollywood Wives. The show also featured Bhavana Pandey, Seema Khan (Sohail Khan's wife) and Neelam Kothari (Samir Soni's wife). The show was loosely based on the life of these four celebrities.