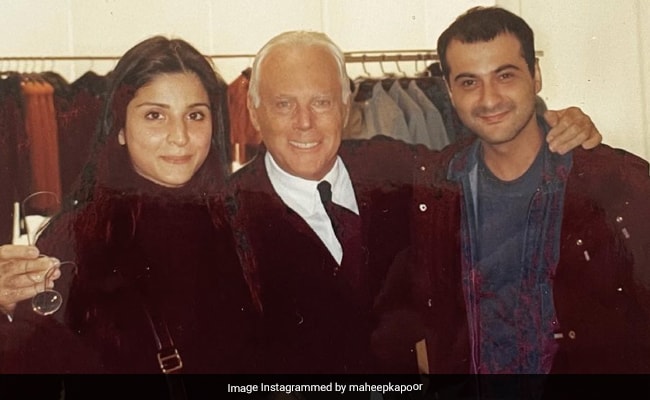 If Maheep Kapoor's latest Instagram entry would require a quick description, it would be called haute couture of throwbacks. On Tuesday, she shared a throwback with her actor-husband Sanjay Kapoor and Giorgio Armani, a man synonymous with fashion. The man clearly needs no introduction, what with his eponymous brands (Giorgio Armani Privé and Emporio Armani) ruling mighty runways, red carpets and magazine covers for over 35 long years. Well, jewelry designer Maheep Kapoor has a fabulous suggestion - a show to be made on the man. Not that he needs one, given the fact that his illustrious career speaks for itself but who are we to complain.

Maheep Kapoor did not reveal when or where the picture was taken but we can clearly see her excitement in the photograph. She put everything into perspective when she wrote: "Never seen a man look bad in an Armani suit." She accompanied the post with the hashtags #TB and #SomeoneMakeAShowOnArmani.

Since the launch of his namesake label in 1975, Giorgio Armani has ruled the international fashion circuit - from haute couture to retail with the expansion of his wings to a product range including accessories, jewelry, fragrances, footwear, cosmetics, home furnishings and a lot more.

Jewelry designer Maheep Kapoor, married to actor Sanjay Kapoor, became a star after she featured in Netflix's smash hit The Fabulous Lives of Bollywood Wives. The show was based on the lives of four star-wives including Bhavana Pandey (wife of Chunky Panday) and Neelam Kothari (married to Samir Soni) and Seema Khan (Sohail Khan's wife). Maheep and Sanjay's daughter Shanaya Kapoor is all set to make her Bollywood debut with a film which will be produced by Karan Johar's Dharma Productions.