"My Day Is Sorted", Writes Maheep As She Watches Sardar Ka Grandson With Sanjay, Shanaya 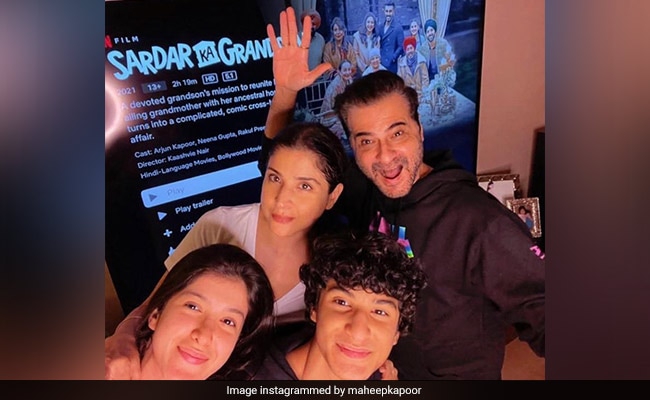 Arjun Kapoor and Rakul Preet's film Sardar Ka Grandson released on Netflix today. Arjun's aunt Maheep Kapoor has given a shout-out to him for the movie and her latest Instagram post says it all. Maheep recently watched Sardar Ka Grandson with her family. On Tuesday, she posted a glimpse of her movie time on Instagram. In the picture, Maheep can be seen posing with her husband Sanjay Kapoor against the backdrop of their TV screen. Their kids Shanaya Kapoor and Jahaan Kapoor are also featured in the frame. Sanjay's excited look is the highlight of the picture.

Sanjay Kapoor shared another picture of their movie time on his Instagram handle. In his caption, he sent best wishes to his nephew and wrote, "All the best Arjun, looking forward to this one."

Shanaya, who will soon make her acting debut with Karan Johar's Dharma Productions, also gave a shout-out to her cousin Arjun Kapoor for Sardar Ka Grandson. Shanaya shared the poster of the recently released film on her Instagram story and tagged Arjun in her post. She added a red heart emoji.

Janhvi Kapoor watched Sardar Ka Grandson with her sister Khushi Kapoor and dad Boney Kapoor. Janhvi posted a picture of her movie time on her Instagram story and wrote a quirky caption in her post. "Now streaming the only family almost as mad as ours #SardarKaGrandson."

Meanwhile, earlier today, Arjun Kapoor had posted a heartfelt note on his Instagram handle in which he dedicated his recently released film Sardar Ka Grandson to his grandmother.

"I have been fortunate enough to get films that have made me tap into my beautiful childhood memories and life experiences. Whether it was a Ki And Ka which was for my mother or now Sardar Ka Grandson for my grandmothers, these are films that have connected to my soul and will forever be my most favourite film," an excerpt from his post read.

Talking about Neena Gupta's character "Sardar" in the film, Arjun said it is similar to his "nani". "The character of Sardar in the film is very similar to my Nani. She was actually a riot when you interacted with her and I could see her in Sardar, every step of the way! I was literally living through various phases, emotions and memories some mine some theirs," he added.

Sardar Ka Grandson features Arjun Kapoor and Rakul Preet as leads. Neena Gupta plays a pivotal role in the film. Aditi Rao Hydari, John Abraham, Kanwaljit Singh and Soni Razdan are also a part of it. The film is directed by Kaashvie Nair.

Arjun Kapoor was earlier seen in Sandeep Aur Pinky Faraar this year. He now has films like Bhoot Police and Ek Villain Returns coming up.