Vicky Kaushal's swag is off the charts in the picture 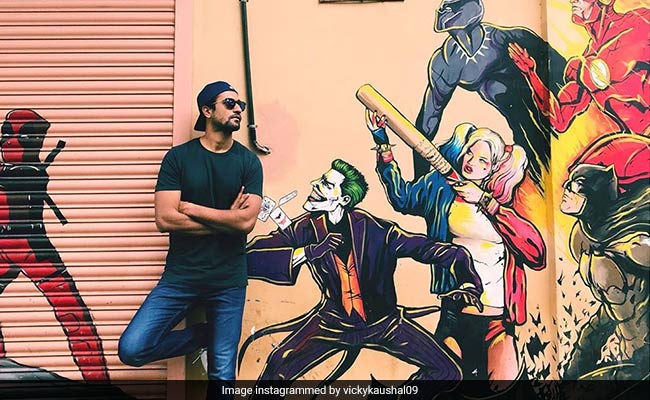 Can you guess who Vicky Kaushal's favourite superhero is? Well it isn't Iron Man or Bat Man, not even Spider Man and Flash, it is the one and only- Shaktiman. Yes, you read that right. In case you are wondering why we brought this up today is because the 31-year-iold actor posted a picture of himself, in which he could be seen standing next to a graffiti with Iron Man, Flash, Batman, Dead Pool, Joker and Harley Quinn imprinted on it. Vicky Kaushal could be seen dressed in a plain black tee and a pair of denims and black cap in the photograph and his swag was just off the charts. Vicky revealed his favourite superhero in his caption. "But I 'heart' Shaktiman," read the caption on his post.

The picture received over 5 lakh likes on Instagram within a few hours. Without much ado, take a look at the post here:

Vicky Kaushal 's Instagram posts never fails to amaze us. A few days ago, the actor posted a picture of himself, in which he could be seen hugging himself. He added a dash of humour to the post. He borrowed a dialogue from his 2018 film Manmarziyaan and he wrote: "Vicky tu banda na bada sahi hai, bas zimmedari ke naam pe 'hug' deta hai."

On the work front, Vicky Kaushal was last seen in Aditya Dhar's Uri: The Surgical Strike, for which he even won the National Film Award for Best Actor. The actor will next be seen in Karan Johar's period drama Takht, the horror film Bhoot Part One: The Haunted Ship and Field Marshal Sam Manekshaw's biopic.