Sharing the Soorma poster on Twitter, Diljit Dosanjh summed up the inspirational story of Sandeep Singh in the caption 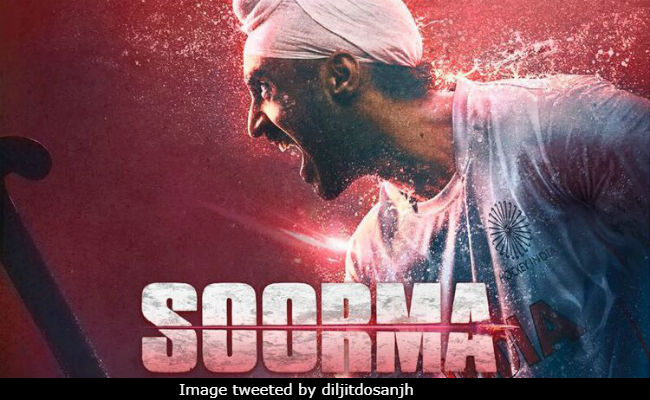 New Delhi: Diljit Dosanjh stars as Hockey player Sandeep Singh in the upcoming biopic Soorma, which has been keeping the Internet busy for a while now. After a sneak peek of Diljit Dosanjh's look from the movie on Monday, the first poster arrived with a bang today. Sharing the Soorma poster on Twitter, the actor-singer summed up the inspirational story of Sandeep Singh in the caption: "A hockey stick and a bullet...One gave direction to his life while the other changed it forever! Soorma - The greatest comeback story ever!" Written and directed by Shaad Ali, Soorma is scheduled to arrive in theatres on June 29.

Check out the first poster of Diljit Dosanjh's new film Soorma, which went viral within a few hours of release.

A hockey stick and a bullet...One gave direction to his life while the other changed it forever! #SOORMA - The greatest comeback story ever! 29th June @sonypicsprodns@taapsee@Imangadbedi@Flicker_Singh@SnehaRajani@IChitrangda@shaadesh@thecsfilmspic.twitter.com/Kvx7l010Fq

Soorma, based on the life of the ex-captain of the Indian National Hockey Team, highlights the story of how he made a comeback in Hockey after being accidentally shot in 2006. Sandeep Singh's injury required him to be on wheel-chair for two years but went on to become the highest goal scorer in the qualifying match for the London Olympics in 2012.

Twitter is impressed with Diljit Dosanjh's new venture and only has words of encouragement: "These are the kind of stories people need to see. Thanks for inspiring people with your work," read a tweet while another added: "Poster looks awesome Soorma! Best of luck!"

Promoted
Listen to the latest songs, only on JioSaavn.com
Previously, this is how Diljit Dosanjh introduced his character from the sports biopic: "A winner wins the game, here's one who will win all your hearts!" Hockey legend Sandeep Singh also shared the poster with Diljit.