"Sorry, jaanu," says Sonam as Janhvi gets up from the chair after the customary kaleere ritual 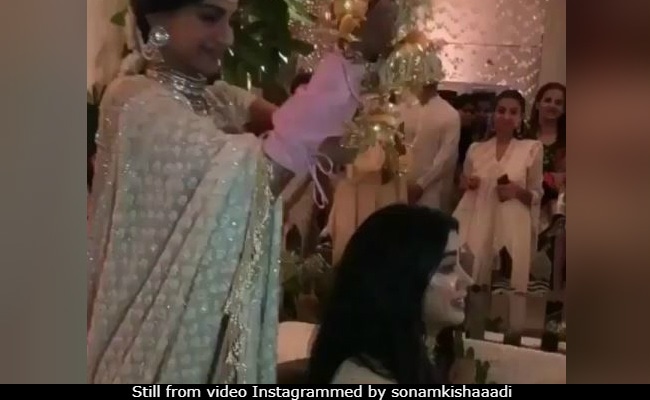 New Delhi: Sonam Kapoor was being the typical big sister at her mehendi ceremony on Monday evening. Of the many videos from inside the blockbuster mehendi, there's one of Janhvi and Sonam that's gone crazy viral and is doing the rounds on the Internet. From the inside moments on social media, it the mehendi ceremony, Sonam was made to wear chudha (red bangles traditionally worn by the bride) and kaleere (danglers attached to the chudhas) as is ritual. And in the video, Sonam can be seen trying to drop the kaleere on Janhvi's head. As per tradition, it is believed that next in line for wedding is the person on whose head the bride's kaleere falls. Now, now... it appears Janhvi Kapoor is the next Kapoor in line to get married.

"Sorry, jaanu," says Sonam as Janhvi gets up from the chair. Check out her hilarious expression - did we spot her breathe a sigh of relief?

Chooda ceremony.. Congratulations @sonamkapoor ,wishing you all the happiness ,unconditional friendship and love in this matrimony with @anandahuja ..you will make such a beautiful bride tomw ..Can't wait Soooo happy for you and @kapoor.sunita and @anilskapoor , so beautifully organised #chooda #mehendi #bride #instagood #shaadimagic

Promoted
Listen to the latest songs, only on JioSaavn.com
Sonam Kapoor and Anand Ahuja's wedding is scheduled for Tuesday afternoon and will be in accordance with Sikh rituals. On Monday evening, mehendi had an impressive line-up of guests and here's a look at just a few of them. In case you begin to wonder why all of them are sporting white, let this be known white traditional wear was the dress code for the evening. Sonam herself wore a beautiful ensemble by Abu Jani and Sandeep Khosla.

Sonam Kapoor and Anand Ahuja will wrap the wedding festivities with a party on Tuesday night, after which Sonam will get busy with her Cannes duties. Sonam will walk the red carpet at the Cannes Film Festival on May 14 and May 15, after which, she will begin her promotional work for Veere Di Wedding, releasing on June 1.