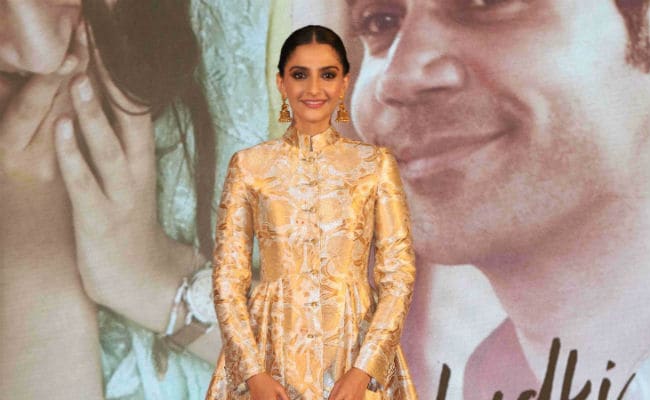 Sonam Kapoor during the promotion of Ek Ladki Ko Dekha To Aisa Laga.

National Award-winning actress Sonam Kapoor, who is gearing up for the release of her forthcoming film Ek Ladki Ko Dekha To Aisa Laga, has said she doesn't believe in labels, which are associated with the actors in the film industry. Sonam Kapoor was interacting with the media at the promotional press conference of Ek Ladki Ko Dekha To Aisa Laga along with his co-actors Anil Kapoor, Rajkummar Rao, Juhi Chawla, director Shelly Chopra Dhar and producer Vidhu Vinod Chopra in Mumbai on Monday.

Same-sex relationships continue to be a taboo in India, despite the Supreme Court scrapping Section 377 that criminalised "unnatural intercourse." And when it comes to lesbians, there is a further lack of acknowledgement or understanding. However, Ek Ladki Ko Dekha To Aisa Laga seems to be talking on a pertinent issue - marriages of middle class, queer and Indian women. The trailer of the film has received a positive response from the audience.

When asked whether she had second thoughts while playing a bold character in the film or not, Sonam said, "I don't know about bold character but there is one thing that I don't believe in and that's 'labels'. When I decide to do a film or a character, I get encouraged by the fact that nobody else would say yes to it except for me."

Anil Kapoor is collaborating with his actress daughter Sonam Kapoor in Ek Ladki Ko Dekha To Aisa Laga for the first time. When asked about his first reaction when he heard script of the film, which revolved around a bold subject, Anil Kapoor said, "When I hear a script, I don't go into the knowledge of everything. If I love the story and the character and if I am in that character then, the rest follows."

"I am not a political person. I am very liberal person. I believe in aLive and Let Live' policy and that's my way of thinking and that's the way I am. I believe in a democratic society otherwise, when I listen to a story that time, I am an actor. If I love the story and I love my role then, I just do it. After that, whatever happens, it's entirely up to the audience," he added.