Anoushka Shankar's Concert Had This Effect On Sonam Kapoor

Sonam Kapoor's smile says it all in the pictures 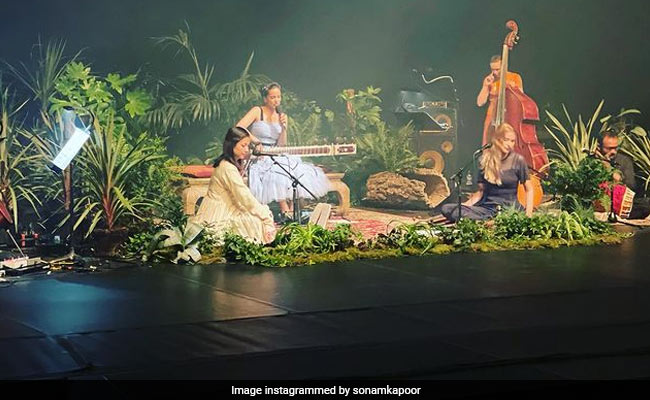 Sonam Kapoor is a stunner and there is no denying this. And almost as if to remind us of this fact, the actress has posted a series of photos that are bound to light up your screens. The 35-year-old, who is currently in London, has shared some happy pictures of herself where she is seen laughing, with a river in the background. In the caption, she said that she had had a joyous day and even thanked British Indian sitar player Anoushka Shankar for a “lovely evening.” Sonam also added a photo from Anoushka's music recital that she attended. Anoushka is the daughter of legendary Indian sitar player, Pandit Ravi Shankar.

Sharing the images, Sonam wrote, “What a joyous day. Thank you, Anoushka Shankar, for a wonderful evening.” Fans and followers were thrilled to see the actress in a happy avatar. One follower wrote, “How awesome! And you look so lovely!” Another fan said, “Mrs Ahuja, why so gorgeous?”

Sonam is currently in England with her husband, entrepreneur Anand Ahuja. The couple can often be seen sharing photos as well as dropping sweet comments on each other's social media posts. For instance, Sonam recently shared her morning makeup routine with fans on Instagram. While most of us were busy taking notes, Anand could not take his eyes off the actress. Replying to her post, he wrote, “ Obsessed w you Sonam Kapoor.” Sonam replied to the mushy message saying, “Anand Ahuja and entertained. Love you monks.” To this, Anand said, “Yes entertained too! PS: Just realized this is what you were doing when I was making your breakfast. Hmm….”

That's not all. Sonam also shared a post expressing her gratitude for being able to stay safe in such trying times, in the company of her spouse. “I miss India so so much, and I've been craving to go back home and see my family and friends desperately. But I realise I might be dissing my new home a little bit that has given me so much including my beautiful husband, Anand Ahuja. ‘A bad day in London is still better than a good day anywhere else',” she wrote.

Sonam, who made her debut in the 2007 film Saawariya, is best known for her work in movies such as Raanjhanaa, Neerja and Veere Di Wedding. She was last seen in the Netflix original AK vs AK, which featured her father, actor Anil Kapoor and director-actor Anurag Kashyap in lead roles.