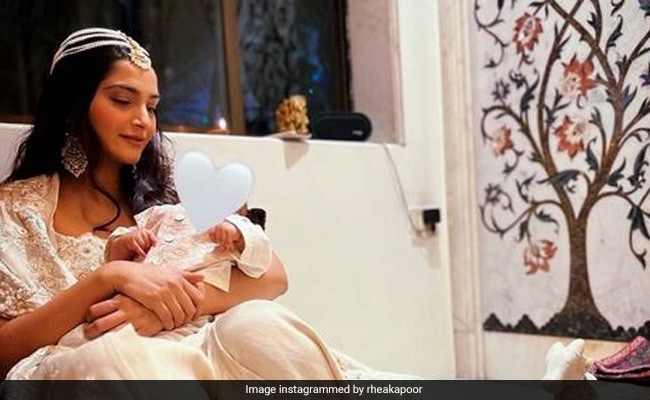 We can't thank film producer Rhea Kapoor for sharing a precious picture of her sister Sonam Kapoor and the actress' son Vayu. Rhea posted a set of pictures from Sonam's Diwali festivities from this year. One picture, however, that has our heart, happens to be of Sonam with her baby son Vayu in her arms. The mother-son duo can be seen twinning in white outfits. "And back to styling my number one with my best girls. Never looked happier, better and more like herself. Sonam Kapoor in Anamika Khanna and Re Ceremonial. Happy Diwali everyone," Rhea captioned the post. Sonam Kapoor and Anand Ahuja welcomed son Vayu in August this year. Sonam and Rhea Kapoor hosted a Diwali party earlier this week after three long years.

Sonam Kapoor and Anand Ahuja, after dating for a couple of years, got married in May 2018 in Mumbai. They welcomed a son in August and named him Vayu. They had a star-studded wedding and reception. Anand Ahuja runs the fashion label Bhane and the sneaker boutique VegNonVeg.