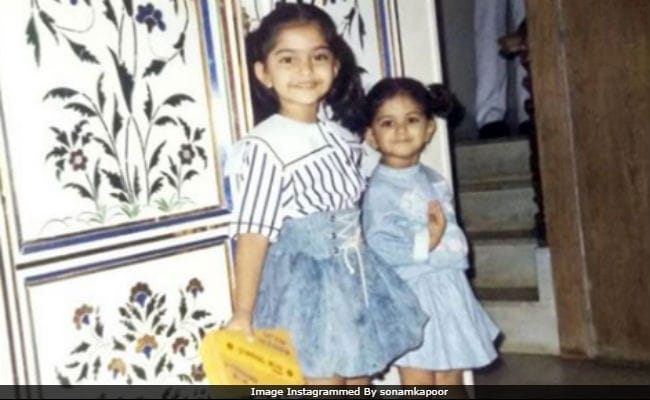 New Delhi: Actress Sonam Kapoor delighted with a throwback picture of herself and sister Rhea on Thursday evening. The picture of the Kapoor sisters has been taken back in December 1988, which Sonam revealed. "We may look super innocent but I can tell we were up to something naughty in this photo," the 32-year-old actress captioned the post and also tagged her parents Anil Kapoor and Sunita Kapoor. (That's a cute picture, Sonam). Sunita Kapoor and Sonam and Rhea's uncle Sanjay Kapoor have commented on the picture using several emoticons. Anil Kapoor and Sunita have been married since 1984. Sonam, Rhea, 30 and Harshvardhan, 27 are the couple's three children.

We may look super innocent but I can tell we were up to something naughty in this photo! #TBT @rheakapoor @anilskapoor

Months ago, Sunita Kapoor shared a similar throwback picture of her daughters and wrote, "My girls. Love you both. All the best... Veere Di Wedding."

Meanwhile, on Harshvardhan's birthday, Anil Kapoor has posted a collage, featuring all the five members of his family. Harshvardhan is an actor and debuted in 2016.

The past one year I have seen such an immense personal growth in you, emotionally, physically & professionally! I am so proud of the fine young man that you have become and the fine actor that you are working on becoming! Your patience has always been your biggest strength! Wish you a very Happy Birthday @harshvardhankapoor ! Lots of love!

Promoted
Listen to the latest songs, only on JioSaavn.com
Sonam and Rhea also launched their own fashion label last year. The brand is called Rheson. Rhea Kapoor also styles the actress.