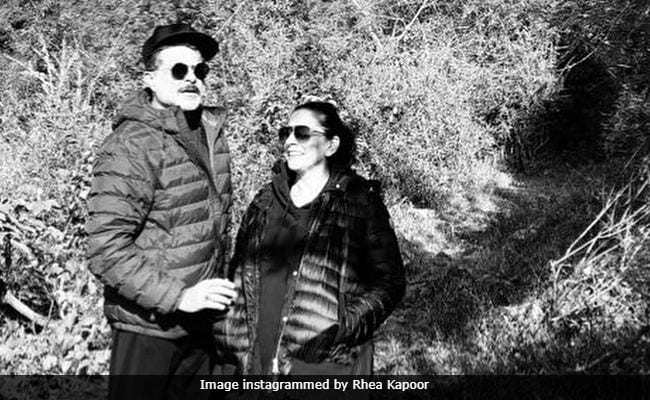 New Delhi: It is difficult shift the focus from a picture featuring Anil Kapoor and Sunita Kapoor but their younger daughter Rhea knows the trick - one funny caption. Rhea shared a picture of Anil and Sunita Kapoor from a trek in the Himalayas (PS: Anand Ahuja wants to know when the picture was taken) and wrote: "This trek through life hand in hand can result in many rewards/gifts. For e.g. me, Sonam Kapoor and sometimes Harshvardhan Kapoor." The use of 'sometimes' for Harshavardhan is a classic example of sibling nok-jhok. All brothers and sisters can relate to what just happened here.

The sibling quarrels aside, take a look at this fabulous picture of Anil and Sunita Kapoor:

This trek through life hand in hand can result in many rewards/gifts. For e.g. me, @sonamkapoor and sometimes @harshvardhankapoor #lifegoals #couplegoals courtesy parents @anilskapoor @kapoor.sunita #35years

Anil Kapoor married Sunita in 1984 and they are parents to Sonam, 32 Rhea, 30 and Harshvardhan, 27. Sonam and Harshvardhan became actors like their father while Rhea is a film producer. Rhea and Sonam are making Veere Di Wedding, also starring Kareeena Kapoor Khan. Sonam Kapoor is also awaiting the release of PadMan, which features Akshay Kumar in lead role.

Promoted
Listen to the latest songs, only on JioSaavn.com
Harshvardhan, who debuted in the ill-fated Mirzya, is currently looking forward to the release of Vikramaditya Motwane-directed Bhavesh Joshi, Harshvardhan also co-stars with Anil Kapoor in Abhinav Bindra biopic.

Anil Kapoor was last seen in Mubarakan and he's currently making Fenne Khan with Aishwarya Rai Bachchan and Rajkummar Rao. He also features in Total Dhamaal witH madhuri Dixit, which went on floors this week.