Esha Deol's Mid-Shoot Must Haves: "Some Coffee And Some Gossip" 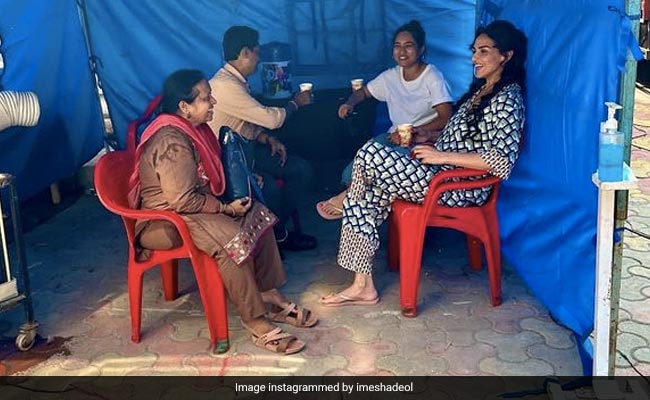 We all love to balance work and play in our lives. Taking a cue from this, Esha Deol is also stealing some break time during her shoot. Needless to say, she's loving these breaks. How do we know? The actress shared photos from a shoot location. We see her sitting inside a tent with three other people. Seems like they are in the middle of a conversation. Esha shared the album and wrote, "Some coffee and some gossip in between shots is always a good idea." Her hashtags gave a glimpse of life on shoot sets: "shoot life", "set life" and "my crew".

Esha Deol recently sent the Internet into a collective meltdown. Thanks to her Rocky Star outfit, waist tattoo and stunning washboard abs, Instagram was set ablaze with the photo. The Dhoom actress spread fitness inspiration when she wrote, "Washboard, eh" and added the hashtags "No pain no gain", "stay fit" and "Monday motivation".

Esha Deol has been having a season of fun and frolic. During her 40th birthday, the actress spent the day with her friends and family. In the birthday photo dump, we spotted her mother, veteran actress Hema Malini. Abhay Deol, Tusshar Kapoor and Fardeen Khan were also part of the party. Esha also shared a frame with her husband Bharat Takhtani. The actress made the forties look stunning in a white ruffled dress. Take a look at the snapshots:

Esha Deol is not always gushing about shoot sets, gossip and parties. Sometimes she surprises us with throwback photos too. The actress sent us into a tizzy when she posted a photo from her childhood. It featured the younger version of her father, veteran actor Dharmendra. He holds a bird in his hand while little Esha tries to pet it. The actress wrote, "Throwback Thursday featuring two small birdies and the He-Man." Dharmendra is often called the "He-Man of Bollywood" by his fans and colleagues.

On the work front, Esha Deol has reunited with actor Ajay Devgn to make her digital debut in the web series Rudra - The Edge of Darkness. The duo has earlier co-starred in films like Yuva, LOC: Kargil and many more.