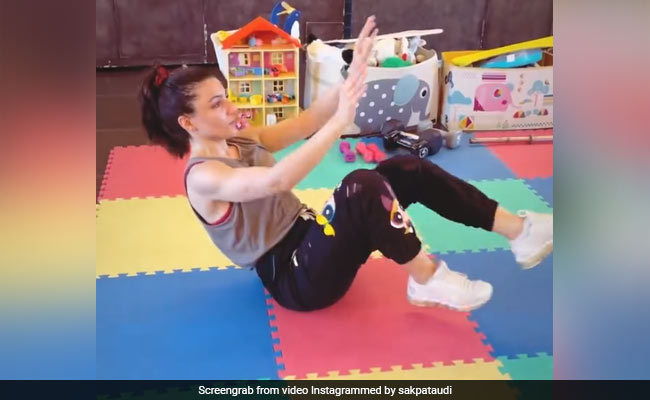 Soha Ali Khan in a still from the video.(Image courtesy: sakpataudi)

Actress Soha Ali Khan, who is currently working on her core strength, on Wednesday, dropped a new fitness video on Instagram. In the video, the 42-year-old actress can be seen acing the workout. She can be seen training with a weighted ball and performing mountain climbers exercise with the wall as her base. Sharing the video on Instagram, Soha Ali Khan shared how she has been neglecting her core while working out for a very long time. "So I have taken my core for granted my whole life, until now," she wrote in the caption. Soha Ali Khan also shared that her goal while working out is to attain "balance and stability" and not "a flat tummy." Soha wrote: "After a baby and 4 decades under my belt I finally felt the need to strengthen my mid-section - it's not just about having a flat tummy - it's about balance, stability and allowing your body to function to its best ability. #coreworkout #fitnessgoals."

Soha Ali Khan's fitness post received a barrage of comments from her fans on social media. "You're an absolute inspiration ma'am," a fan wrote in the comments section of the post, while another one wrote: "Go core."

Last week, Soha Ali Khan marked Independence Day with a special Instagram post. She dropped a picture of herself and her daughter Inaaya on the platform. In the picture, the mother-daughter duo can be seen twinning in matching white outfits. "May you have freedom from suffering; may you have the freedom to do what you choose to and what makes you happy and may you have the freedom to be what you were meant to be," she wrote in the caption of the post.