Sita And Lakshman In A Ramayan Throwback, Courtesy Dipika Chikhlia

"Some relationships grow with time when you feed them with respect," wrote Dipika Chikhlia 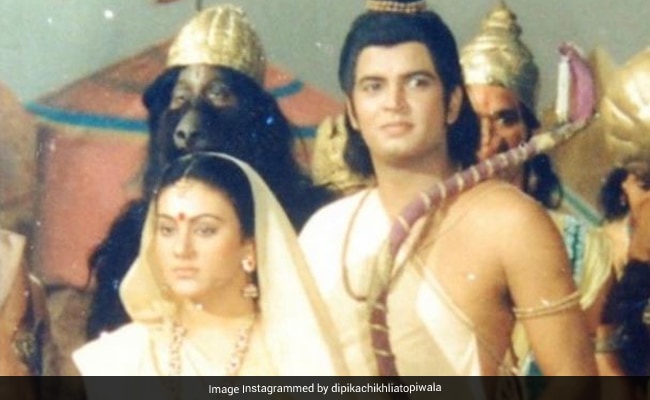 Dipika Chikhlia, who starred as Sita in Ramanand Sagar's Ramayan, shared a throwback picture from the sets of the show on her Instagram profile on Wednesday. The photograph also features Sunil Lahri, who played the role of Lakshman in the show. Ms Chikhlia also shared a relatively recent picture along with her co-star Sunil Lahri from the sets of a TV show. She captioned the post: "Now, then and forever. Some relationships grow with time when you feed them with respect. Shoot diaries." Meanwhile, Sunil Lahri also shared a picture collage on Instagram and he wrote: "Dipika ji and me... Ramayan ki shooting aur abhi ki shooting ... Abhi ki shooting kaun si ho sakti hai thoda dimag lagaiye?"

Now And then ...and for ever .....some relationship grown with time when you feed it with respect .....shoot diaries #shoot #ramayan #Ramayana #sunillahiri #laxman #lakhan #chitrakoot #panchvati #ayodhya #studio #camera #direction #production

Here are some more Ramayan memories shared by the actors:

There is a story behind this scene ....so I shared ...we were busy with the shoot, learning lines and so on...the day was as normal as could be, after the scene got over our cameraman Ajit naik (cinematography) came to tell us please vacate the place and don't stand underneath the tree and we were wondering all the three actors as to what was the hurry and why so abrupt ...he asked all the technicians also to clear the field ..sagar Saab was also wondering what happened ...and then he pointed out to a huge fat snake on the tree and what followed after that was we all RAN for our life sooo many memories ....#memories#ramayan#sagarworld# tree#banyantree#snake#fear#phobia#umbergoan#studio#sets#actors#actress#costume

Written, produced and directed by Ramanand Sagar, Ramayan,  a Sunday morning staple in the Eighties, first aired on Doordarshan in 1987 and the show acquired a cult status over the years. It clocked 33 years in 2020. The show starred Arun Govil, Dipika Chikhlia and Sunil Lahri as Lord Ram, Sita and Lakshman, respectively. The show also featured Lalita Pawar as Manthra, Dara Singh as Hanuman, and Arvind Trivedi as Ravana. Ramayan was re-telecast on Doordarshan during the lockdown.