Of Sita And Sisterhood In A Ramayan Throwback, Courtesy Dipika Chikhlia

The one with Sita and her "sister squad" 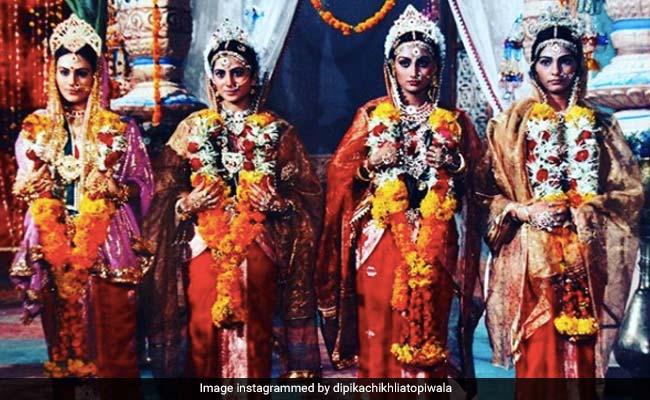 Dipika Chikhlia, a star from the golden age of Doordarshan, who is best-known to fans of Ramanand Sagar's Ramayan as Sita, shared a beautiful throwback picture from the sets of the TV show on her Instagram profile, on Thursday. Ms Chikhlia captioned the post: "Sisters waiting in a queue. They are bound by an umbilical cord and yet how different are they and their life journeys." She accompanied the post with the hashtags #ramayan, #sisters and #sistersquad. The photograph appears to be from the swayamvara scene, where Sita and her sisters Urmila, Mandavi and Shrutakirti, picked their respective grooms from a crowd of suitors. Sita was married to Lord Ram (played by Arun Govil in the show), while Urmila was the wife of Lakshman (played by Sunil Lahri). Sita's other sister Mandavi was married to Ram's brother Bharat. Shrutakirti was the wife of Shatrughna, who was also Ram's brother.

Sisters waiting in a queue....they are bound by an umbilical cord and yet how different are they and their life journeys. #ramayan #ramayana #ram #sita #jaishriram #hanumanji #jaihanuman #devi #goddess #sisters #sistersquad

This is not the first time that the 54-year-old actress has shared a memory with her onscreen sisters. Earlier, she posted a photograph, in which she was seen surrounded by her onscreen sisters. She captioned the post: "Sita ji with her sisters," adding the hashtags #girlpower, #love #spreadhappiness #spreadpositivity to her post.

In March, when Dipika Chikhlia appeared on an episode of Kapil Sharma's talks show The Kapil Sharma Show, she revealed that she became so identified as Sita even off screen that people rarely greeted her with "hi or hello," instead, they always bowed down before her with folded hands.