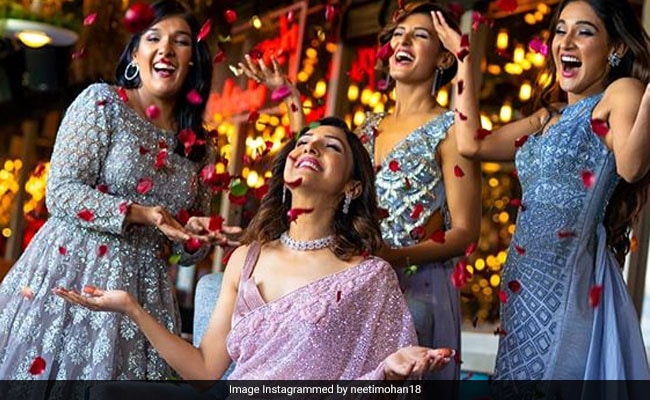 Ishq Wala Love singer Neeti Mohan, who is getting married to actor Nihaar Pandya on February 15, treated her Instafam to some million dollar pictures from her pre-wedding photoshoot just days prior to her wedding. However, Neeti's dreamy pre-wedding photographs are not with Nihaar but with her sisters Shakti, Mukti and Kriti Mohan. On Tuesday, Neeti shared photos from her pre-wedding photoshoot on her Instagram timeline featuring herself with sisters. In one of the pictures, the bride-to-be looked gorgeous in a lilac saree while her sisters were dressed in outfits in shades of blue. "This moment," she captioned the picture with her sisters. In another picture, Neeti Mohan can be seen wearing a blue sequined lehenga.

Shakti and Mukti Mohan also shared photographs of themselves with the bride-to-be. Shakti captioned one of the pictures as: "We will not let you go."

Earlier this month, Neeti and Nihaar appeared on The Kapil Sharma Show where they spoke about their relationship. "A friend was a part of Aasma - the band that Neeti also had an association with. I always asked that friend to introduce me to Neeti, but it never happened. Surprisingly, at the same friend's wedding in Goa, almost a year ago, I met Neeti formally. I was in love with her... Thereon started our love story," said Nihaar, who was last seen in Manikarnika: The Queen of Jhansi.

Neeti Mohan made her singing debut in Bollywood with the track Ishq Wala Love (2012), which was part of Karan Johar's 2012 film Student Of The Year. Jiya Re, Saadi Galli Aaja and Sau Aasmaan are some of Neeti's most popular songs.