Neeti Mohan and Nihaar Pandya married on February 15 in Hyderabad 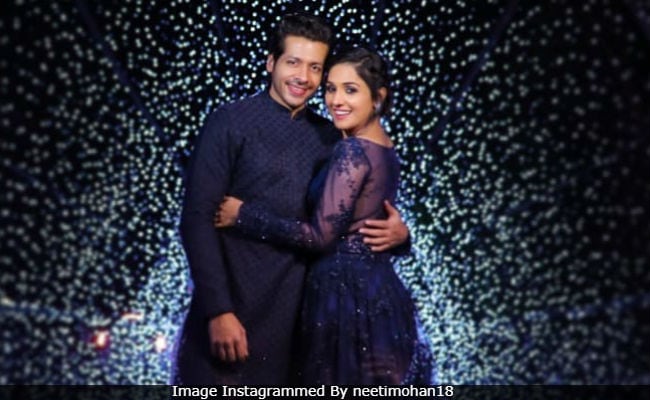 Singer Neeti Mohan and actor Nihaar Pandya, who married on February 15 in Hyderabad, postponed their wedding reception indefinitely due to her father Brij Mohan Sharma's health, reported SpotboyE. As per the report, Mr Sharma has been admitted to the ICU of a hospital in Hyderabad and is under observation. Neeti Mohan and Nihaar Pandya were to host a wedding reception at Hyderabad's Four Seasons hotel. However, owning to Mr Sharma's health condition, they postponed the function and informed the invitees via text messages. "Dad cannot take too much physical stress, so we had kept him in the hotel room. He was not to be seen at the mandap and people freaked out. We had called the doctors to the hotel room and they suggested that he should be shifted to the hospital," SpotboyE quoted Neeti's sister Mukti Mohan as saying.

"Actually, a year and half ago, dad had become very serious owing to some exertion. Since then, we have been very careful when it comes to any hectic schedule," she added.

Neeti Mohan and Nihaar Pandya's wedding functions took place at the Falaknuma Palace in Hyderabad. The festivities were attended by celebs like Sania Mirza, Ayushmann Khurrana, his wife Tahira Kashyap, Aparshakti and others.

Neeti Mohan and Nihaar Pandya confirmed their wedding in January. As guests on The Kapil Sharma Show, they spoke about their relationship and Nihaar said, "A friend was a part of Aasma - the band that Neeti also had an association with. I always asked that friend to introduce me to Neeti, but it never happened. Surprisingly, at the same friend's wedding in Goa, almost a year ago, I met Neeti formally. I was in love with her... There on started our love story."