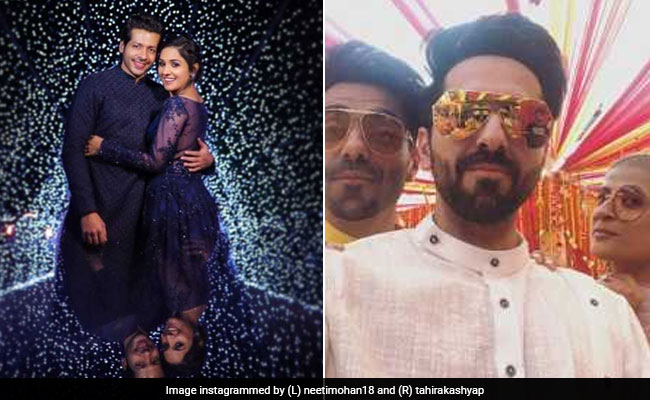 Ayushmann Khurrana added stardust to singer Neeti Mohan and Nihaar Pandya's mehendi ceremony, which took place in Hyderabad on February 14 (Valentine's Day). Ayushmann was accompanied by his wife Tahira Kashyap and actor brother Aparshakti. Pictures from the ceremony, featuring the Khurranas, have been shared by Tahira on her Instagram stories. Ayushmann looked dapper in a pant and short kurta while Tahira opted for a lehenga choli set. Neeti Mohan and Nihaar Pandya will marry today and news agency IANS earlier reported that on the mehendi day, a combined sangeet ceremony and engagement function will also be held. All the wedding ceremonies are being held in Hyderabad's Falaknuma Palace. After the functions in Hyderabad, Neeti and Nihaar will host a wedding reception for Bollywood in Mumbai later this month.

Here are pictures of Ayushmann, Tahira and Aparshakti at Neeti Mohan and Nihaar Pandya's mehendi. 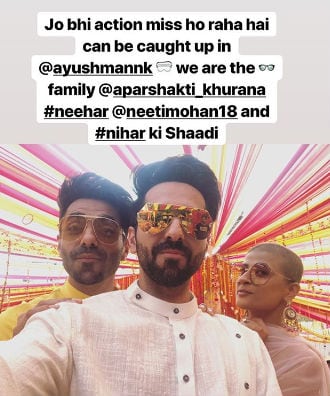 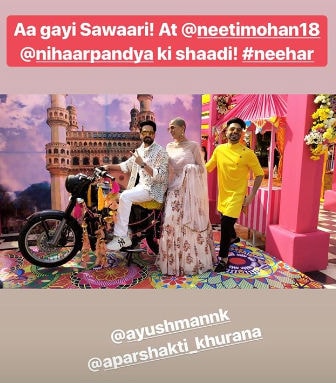 And, in case you missed it, take a look at a picture of the soon-to-be married couple from their wedding festivities.

Neeti did a pre-wedding photoshoot with her sisters Shakti, Mukti and Kriti Mohan. Some fabulous pictures from the photoshoot were shared by the Mohan sisters on social media. Take a look.

Earlier this month, Neeti and Nihaar were Kapil Sharma's guests on The Kapil Sharma Show during which, they spoke about their relationship. "A friend was a part of Aasma - the band that Neeti also had an association with. I always asked that friend to introduce me to Neeti, but it never happened. Surprisingly, at the same friend's wedding in Goa, almost a year ago, I met Neeti formally. I was in love with her... Thereon started our love story," said Nihaar.

Neeti Mohan is a well-known playback singer. Jiya Re, Ishq Wala Love and Saadi Galli Aaja are some of her famous songs. Nihaar Pandya, a model-turned-actor was recently seen in Manikarnika: The Queen of Jhansi.