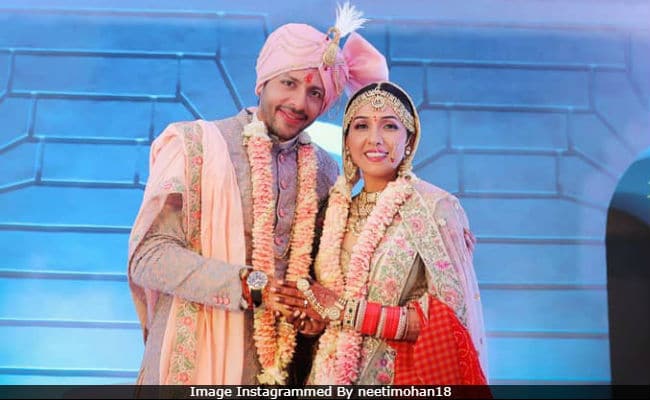 On Wednesday, Neeti Mohan and Nihaar Pandya treated their Instagram followers to pictures from their wedding, which happened at Hyderabad's Falaknuma Palace on February 15. The couple shared identical posts on their respective accounts, along with a message that read, "With the blessings of family, friends and well-wishers, we are blissfully married. Dad's health is getting better each day. The Mohan and Pandya families thank you for your constant love and support." Neeti's father Brij Mohan Sharma was reportedly admitted to a hospital after the wedding due to his deteriorating health conditions. Because of which, Neeti and Nihaar cancelled their wedding reception in Hyderabad.

For the wedding, Neeti wore a cream and pink coloured lehenga and accentuated her look with a mathapatti, a nose ring and bridal choora while Nihaar opted for a sherwani. Apart from the wedding picture, the couple also shared photos from the other functions.

With the blessings of family, friends and well wishers, we are blissfully married. Dad's health is getting better each day. The Mohan and Pandya family THANK YOU for your constant love and support

Speaking of Mr Sharma's health, Neeti sister Mukti Mohan told SpotboyE, "Dad cannot take too much physical stress, so we had kept him in the hotel room. He was not to be seen at the mandap and people freaked out. We had called the doctors to the hotel room and they suggested that he should be shifted to the hospital."

News agency IANS earlier reported that Neeti Mohan and Nihaar Pandya have planned to host a wedding reception in Mumbai for their Bollywood colleagues and friends.

Neeti Mohan is a well-known playback singer and has songs like Jiya Re, Ishq Wala Love and Saadi Galli Aaja on her resume. Nihaar Pandya is a model-turned-actor and was recently seen in Manikarnika: The Queen of Jhansi.