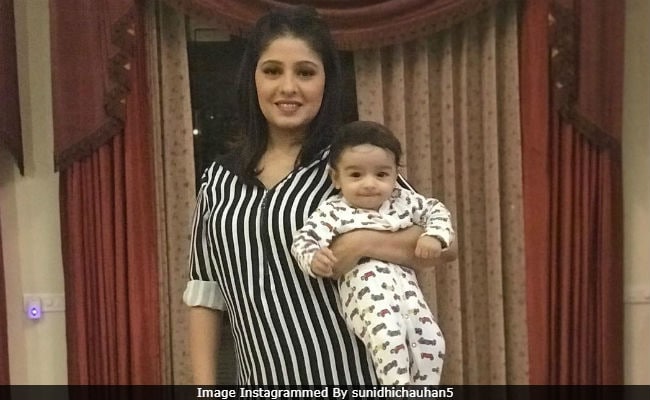 New Delhi: Singer Sunidhi Chauhan, who became a mother this January, shared the first picture of her son on Instagram today. In the picture, Sunidhi can be seen holding her son, who poses cutely. He is dressed adorably in a white pyjama set. (Aww). "Ready for my first gig as a mom," Sunidhi captioned her post. Several of Sunidhi's colleagues like Shreya Ghoshal, Akriti Kakar, Harshdeep Kaur, Salim Merchant have commented on the mother-son duo's picture. "Aww! This is co cute and so cool. Teg and momma, full on swag," commented Shreya while Akriti Kakar wrote, "This is so endearing. The little baby and that glow on you. More and more power to you."

Ready for my first gig as a Mom!

Sunidhi Chauhan married music composer Hitesh Sonik in 2012. This is the couple's first child. While she was pregnant, Sunidhi Chauhan told news agency IANS that she will balance her personal and professional life after baby's arrival. "Every girl in the world goes through this and I am one of them. I have to balance both. I do know that my first and last love is my singing, the gift God gave to me. So, I will take care of both and just make sure I am at peace with myself," she had said.

Promoted
Listen to the latest songs, only on JioSaavn.com
Her father Dushyant Chauhan had revealed that Sunidhi and her husband Hitesh had hoped for a baby girl.

Sunidhi Chauhan is known for singing hit tracks such as Ruki Ruki, Dance Pe Chance, Kamli, Desi Girl, Navrai Majhi and many others. She has also featured on several singing realty TV shows as a judge.