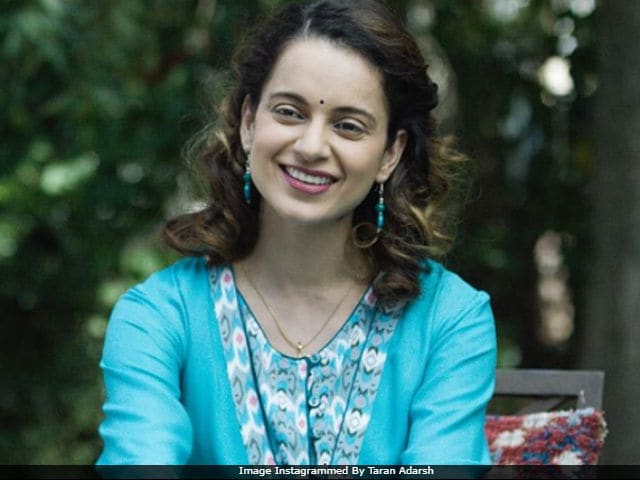 New Delhi: Kangana Ranaut's latest film Simran, which released last Friday, has earned Rs 12.06 crore so far at the box office, reports trade analyst Taran Adarsh. The film received a lukewarm response in its first weekend and on Monday, it collected Rs 1.41 crore. Box Office India describes the film as 'flop' and adds Simran to the list of flops of 2017. The Hansal Mehta-directed film opened to middling reviews. Kangana's performance as Praful Patel, a Gujarati divorcee living abroad, has been appreciated by some. Taran Adarsh blamed Simran's low box office score on Sunday to the first match of the ongoing India vs Australia series.

Here's how much Kangana Ranaut's Simran has made.

In his review for NDTV, film critic Raja Sen gave Simran 2.5 stars out of 5. "Hansal Mehta's Simran works best when breezing along with a light touch, when Kangana Ranaut effervescently befriends bartenders and cheerily refuses to take no for an answer. Unfortunately the film, doubling up as a showreel for the actress, pretends also to be a drama, a thriller, even a sweet romance. None of these other gears work well enough, and the eventual result is tedious," he wrote.

Simran is Kangana Ranaut's second film of the year after the ill-fated Rangoon, which released last February. Despite an impressive star cast that included - Kangana, Shahid Kapoor and Saif Ali Khan, the Vishal Bhardwaj-directed film failed to leave a mark at the box office.

Promoted
Listen to the latest songs, only on JioSaavn.com
Kangana Ranaut's film released amidst the debates surrounding her past love life and a fight over giving proper credits to the writer.

Simran released along with Farhan Akhtar's Lucknow Central, which is a few crores behind Kangana Ranaut's film.