Sidharth Malhotra described Shershaah as "A film which has had a long journey for me and a real life character I am proud to play." 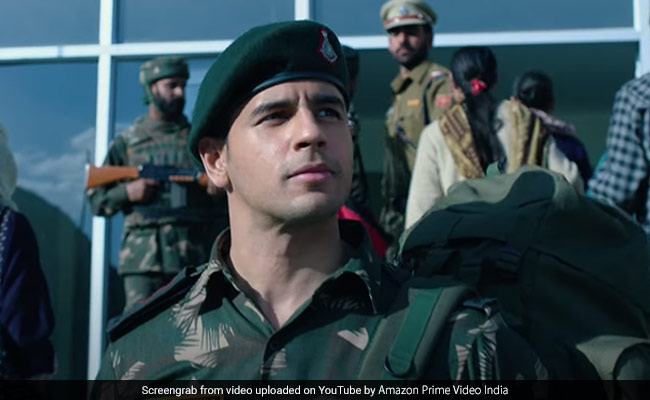 Sidharth Malhotra in a still from Shershaah teaser (courtesy YouTube)

Sidharth Malhotra's upcoming movie Shershaah, which was previously supposed to open in cinemas, has taken the digital route. On Thursday, producer Karan Johar revealed that Shershaah will now release digitally on OTT platform Amazon Prime Videos. Shershaah will premiere on Amazon Prime on August 12. Shershaah is based on the life of Captain Vikram Batra, who died in the Kargil War and was honoured with the Param Vir Chakra posthumously. Announcing the release date, Karan Johar wrote: "An ordinary man's extraordinary journey of courage and valour. Extremely honoured, thrilled and excited to present Shershaah, releasing on August 12 only on Prime Video."

Sidharth Malhotra, who has been cast as Captain Vikram Batra in Shershaah, added: "Heroes live on through their stories. We are honoured to bring to you the true story of the Kargil War hero, Captain Vikram Batra (PVC). A film which has had a long journey for me and a real life character I am proud to play." Sidharth's rumoured girlfriend Kiara Advani, who co-stars with him in the movie, shared the new release date with this post: "The extraordinary journey of bravery, sacrifice and valour like no other."

The film's team also shared a teaser of Shershaah to make the release date announcement:

The filming of Shershaah began in May last year and a few months later, in September, Sidharth Malhotra suffered an injury while shooting for the film in Kargil. Directed by Vishnu Varadhan and produced by Karan Johar's Dharma Productions, Shershaah was initially supposed to release in cinemas last year. Earlier this year, the makers of Shershaah had announced a date change with July as the release month.

How Does One Keep Kids Engaged On A Holiday? Gul Panag Has The Answer