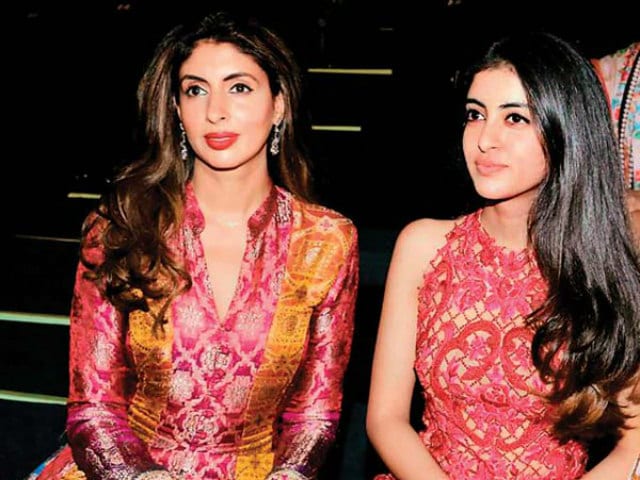 New Delhi: Shweta Bachchan Nanda belongs to a family of actors - the first family of Bollywood, in fact. The Bachchans - Amitabh and Jaya Bachchan, Aishwarya Rai and Abhishek Bachchan - are among Indian cinema's most accomplished stars. Between them, they have five Padma honours and countless film awards. But Shweta, 42, is not an actor and she says that she would be worried if her daughter ever wanted to become one. Navya Naveli Nanda, daughter of Shweta Bachchan and Nikhil Nanda, is 19 and left school this year. Her mother says that being an actor is not easy, involves hard work and the possibility of failure is all too real.

Speaking as the launch of Aishwaryaa R Dhanush's new book in New Delhi this week, Shweta Bachchan Nanda said, "I will be worried if if (Navya Naveli) plans to be an actor. I don't think it is as easy as it looks. You have to work extremely hard, especially if you are a woman. And I wonder if she has in her to bear with all of it. Also, there is a lot of failure involved, which many people don't see. The failure is personal, your acting skills, the way you look on screen is slashed out in open."

Navya Naveli Nanda, who was at school with Shah Rukh Khan's son Aryan, has been an object of public fascination this year, with pictures of her circulated widely on social media. The scrutiny has been unusually intense for someone who has no stated plans of becoming an actor - but perhaps not surprising, given her lineage.

Shweta, who also has a son, addressed an open letter to the media recently, asking that they give Navya Naveli her "private life" back. "My children are no celebrities. Why smash them on the internet for one reason or the other? Let them earn their attention on their own. It shouldn't be just because they are related to somebody," she said.

The Bachchans are protective of Navya Naveli Nanda and have taken pains to prevent news flashes from reaching her. "We have no Google alert for her, because it would be very upsetting for her to read these things. I didn't do anything for two years thinking that it would only draw more attention towards it," Shweta Bachchan Nanda said. Aishwarya and Abhishek Bachchan are similarly protective of their five-year-old daughter Aaradhya, being careful to shield her from cameras and the public gaze as much as possible.

Having said all of the above, Shweta did say that Navya Naveli is free to pursue her hopes and dreams. "My home is a home of women. Be it my grand-mother, mother, sister-in-law and me, we all are strong opinionated women. I am sure she will carry it forward," Shweta said.

Shweta Bachchan Nanda says anybody who wants to be an actor should 'prepare' like her mother Jaya Bachchan did, not 'stumble' into it like her father Amitabh Bachchan. "My mother was the eldest daughter in the family. She graduated and told her father about her ambition of becoming an actor. Soon, she joined acting school and was a great student. I feel this is the way to go about it. Not because you see this as an easy way out. Instant fame and money in this industry is a myth," she said.

Promoted
Listen to the latest songs, only on JioSaavn.com
Shweta Bachchan Nanda, who writes a column, has written the foreword for Aishwaryaa R Dhanush's book Standing On The Apple Box.