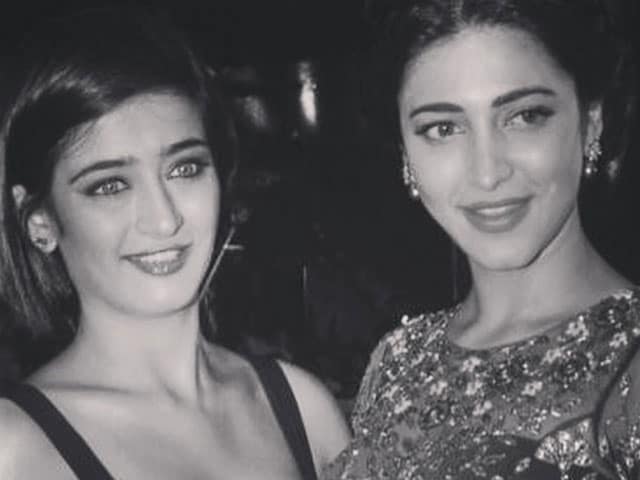 Bengaluru: Shruti Haasan said she's "protective" about her younger sister Akshara, who made her debut in Bollywood in R Balki's Shamitabh, co-starring Amitabh Bachchan and Dhanush.

"I'm very protective about Akshara and also very proud of her achievements. I can't wait to see her do more and make us all proud," Shruti told IANS.

Daughters of actors Kamal Haasan and Sarika, both Shruti and Akshara have been a part of the entertainment industry in more than one ways. Shruti is a singer-composer, while Akshara has served as assistant director before appearing onscreen. (Also Read: Impossible for Me to Perform Like My Parents, Says Shruti)

Shruti, who has starred in Hindi, Tamil and Telugu films, said that acting was never on her mind initially.

"I never planned to be an actress in Bollywood as I never felt I could look the part. I always wanted to get into music - I am particularly passionate about composing," she shared.

In the Hindi film industry, Shruti has done films like Luck, Dil Toh Baccha Hai Ji, D-Day, Gabbar is Back and Welcome Back; among Telugu films, she has been seen in Gabbar Singh, Ramayya Vasthavayya, Aagadu and Race Gurram; and in Tamil language, Shruti has starred in 3 and Poojai.

As of now, Shruti is busy working on five projects simultaneously, including Tamil-Telugu film Puli and Hindi film Rocky Handsome. (Also Read - Puli Exclusive: What Went Into the Making of Shruti Haasan's Costumes)

"With five films in the pipeline, I have been really busy with work and have not had the time to compose. I look forward to composing music next year," she said, and added that she does not feel any different while acting in the southern world after Bollywood.