"Our Guardian Angel": Shilpa Shetty Writes A Note On Her Dad's Birth Anniversary

Shilpa Shetty shared an image of herself with her dad and sister, actress Shamita Shetty 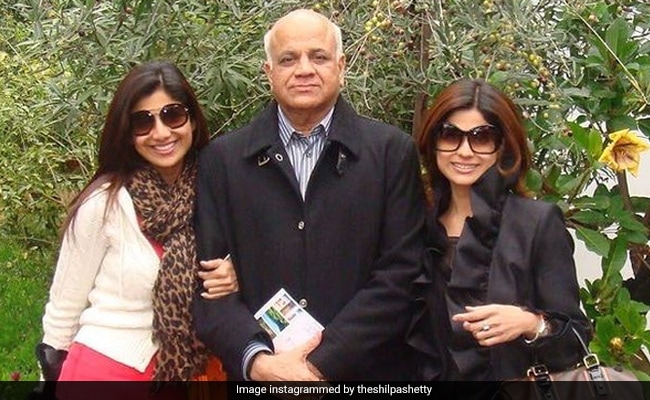 Shilpa Shetty loves to shower affection on her friends and family on social media. In addition to being an actress and author, she is also a doting mother, wife and daughter. We saw a glimpse of this when Shilpa Shetty shared a heartwarming note on the occasion of her father's birth anniversary. Sharing an image of herself with her sister, actress Shamita Shetty, and their dad, Surendra Shetty,  the actress wrote, “Happy birthday, Daddy. We know that you're right here protecting us like our Guardian Angel…Always shielding and bringing us victorious out of tough situations.” She also tagged her sister in the post.

Speaking of her sister Shamita Shetty, Shilpa Shetty added, “Tunki needs you around now, Daddy and I know you're already there with her. Love you… praying for you always!” Shamita Shetty is currently a contestant on the reality show Big Boss 15.

On Father's Day too, this year, Shilpa Shetty shared a throwback image of her father and said, “My First Hero... Miss you, Dad. Every day.” The image was initially posted by Shamita Shetty. Take a look:

A few weeks ago, Shilpa Shetty also showered love on her sister Shamita Shetty in a long post.  In a note, she praised Shamita Shetty's performance in the Big Boss house and spoke about their humble beginnings. She said, “Appreciation post. This is for my brave soul, a fighter, my sister Shamita Shetty. It's sad to see how some are misinterpreting Shamita's behaviour as arrogant because, “they think” she's privileged or is fake, and she doesn't have an opinion (sometimes too opinionated actually), or doesn't use her head only heart, which is absolutely untrue/rubbish.”

Shilpa Shetty also added, “I feel Shamita is being accosted for having a heart / being emotional and viewed as privileged by some, but if she was, she wouldn't be in this show trying to carve a niche for herself professionally.”  She went on to clarify, “We were not born into wealth, both of us have struggled and worked our way up, uphold our middle-class values, dignity being of paramount importance… that's the upbringing.”

Shilpa Shetty made her Bollywood debut with the 1993 hit Baazigar. She was last seen in Hungama 2. The actress is currently a judge on the reality show, India's Got Talent.