For the caption, Shehnaaz has just used a flower emoji 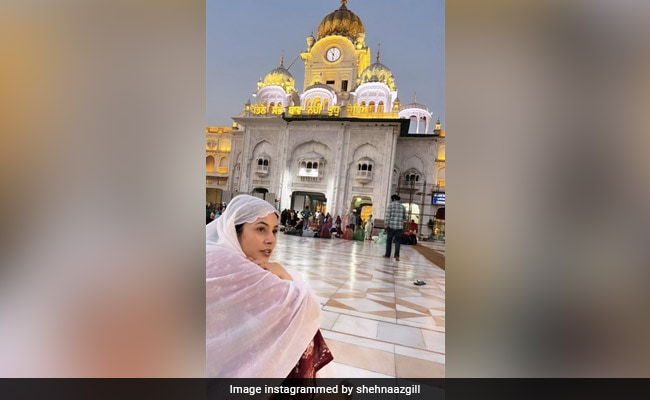 Shehnaaz Gill has started the weekend by paying a visit to the Golden Temple in Amritsar, Punjab. Shehnaaz has shared a picture too. For the caption, Shehnaaz has just used a flower emoji. Fans just fell in love with the frame. A person wrote, “So pretty.” Another said, “I love that you are so down to earth and that you are still you you are dedicated to being better at your work.” This person spoke for all of us when he said, “Kitni cute lag rahi ho [You are looking so cute].”

Shehnaaz Gill is currently in Punjab and she is keeping us updated by sharing glimpses of her daily activities. Yesterday, she shared a video from her time with her family. Here, she is having a gala time singing boliyan and performing gidda with the other members of the family.

Shehnaaz Gill has also allowed us to take a look at “mera pind… mere khet”. The clip opens with Shehnaaz sitting on a tracker. Moments later, she is running amidst the farm field.

Shehnaaz Gill recently appeared on Shilpa Shetty's show Shape Of You. On the show, Shehnaaz for the first time opened up about the criticisms that came her way for dancing at a party months after the death of actor Sidharth Shukla. She said, “Today is the first time I am talking about this and it's only because you are asking me to. Otherwise, I never talk about these things no matter who says what. Why should I tell anyone about my relationship with Sidharth? What was my connection with him, what was my relationship with him, I don't need to be answerable to anyone. How important he was to me, how important I was to him, that I know. So, I don't have to give any explanation to anyone."

Shehnaaz Gill is known for her roles in Punjabi films including Daaka and Kala Shah Kala. She was last seen in Honsla Rakh alongside Diljit Dosanjh and Sonam Bajwa.