Shehnaaz Gill Just "Had To" Dance With Vicky Kaushal To This Song. Watch

"Song this beautiful...Had to do a dance on it," wrote Shehnaaz Gill 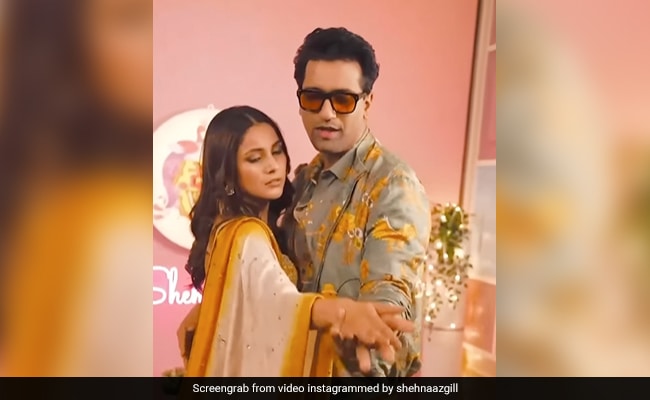 Shehnaaz and Vicky Kaushal in a still from the video. (courtesy: shehnaazgill)

Vicky Kaushal is the talk of the town thanks to his upcoming release, Govinda Naam Mera. As part of promotions for the film, Vicky has been appearing on various shows. Recently, the actor appeared on a show hosted by actress-singer Shehnaaz Gill. On the occasion, the two not only chatted but also grooved to a song from Govinda Naam Mera. Moving away from the fast-paced tracks, Shehnaaz and Vicky danced to the melodic Bana Sharabi. In the video, the two are twinning in mustard-hued clothes. In the caption, Shehnaaz said, “Song this beautiful…Had to do a dance on it.”

After the interview, Shehnaaz Gill also shared her thoughts on Vicky Kaushal, praising the actor. In the caption, she said, “Very seldom you meet a star who makes you feel you are one of them. Very seldom you get this feeling that you know this person from ages and his family. Very seldom, in your second meeting, you feel that you know this person like he is family. I guess this is what a true star is. Vicky Kaushal, I'm delighted to have met you once again and today's chat was more than just conversations... I wish you nothing but success, good health and positivity always. All the best for Govinda Naam Mera. Waheguru Mehar Kare. Tuhadi movie superhit hove (May your film be superhit)."