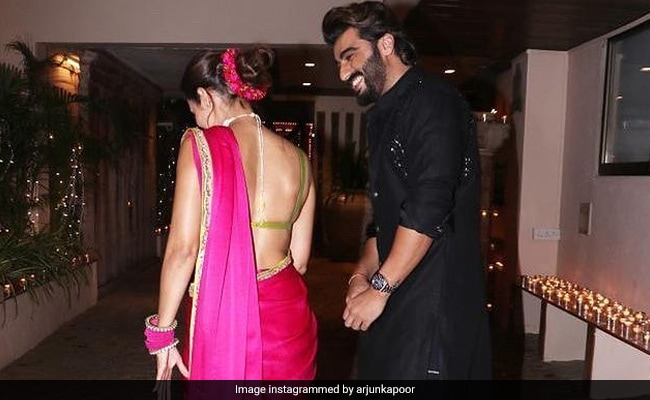 Love is in the air and it is all thanks to Bollywood star Arjun Kapoor. The actor, who is in a relationship with actress and TV personality, Malaika Arora, has shared a post on Instagram that screams “couple goals”. The actor shared a picture of the couple on their way to Arjun Kapoor's uncle, Anil Kapoor's Diwali bash held recently. In the image -- which features the two stars with their backs partly towards the camera -- Malaika Arora and Arjun are seen laughing at something mid-conversation. Sharing details, Arjun Kapoor said in the caption, “When she laughs at my nonsense, she makes me happy,” tagging Malaika Arora.

On Malaika Arora's birthday too, Arjun Kapoor penned a sweet note in which he said that all he wanted to do was make her smile. Sharing a photo in which Malaika is kissing Arjun Kapoor on the cheek, he wrote, “On this day or any other all I want is to make you smile...May this year you smile the mostest.”

Responding to the post, Malaika Arora left a cheeky response that said, “Clearly, I am making you smile in this pic.”

Guess who clicked the loved up photo of the happy couple? Well, it was none other than the couple's superstar friend, actress Kareena Kapoor Khan. And, she was not one to forget it. The actress even wrote in the comments section, “I want photo credit Arjun Kapoor Ji.”

Malaika Arora and Arjun Kapoor have reportedly been in a relationship since 2018. Malaika Arora has been previously married to actor-filmmaker Arbaaz Khan. Following a marriage that lasted for over 19 years, the two went their separate ways in 2017. They have a son named Arhaan Khan.

Meanwhile, Arjun Kapoor is the son of producer Boney Kapoor and Mona Kapoor. He made his debut in 2012 in the film Ishaqzaade.