"Love how we got the same sweatpants without knowing," wrote Shanaya Kapoor 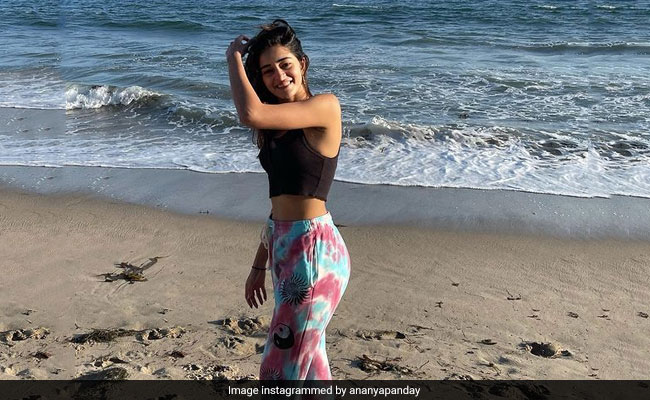 Ananya Panday shared some happy pictures from her latest outing at the beach. On her Instagram profile, Ananya shared these pictures, in which she can be seen striking a few poses with her pet pooch by her side. An excited Ananya captioned her post: "Fur realzzz this is how I'm tryna be for the rest of my life." However, it was Ananya's bestie Shanaya Kapoor's caption that stole our attention. She wrote: "Love how we got the same sweatpants without knowing. LOL." Ananya and Shanya have been friends for the longest time. Their close-knit circle also includes Shah Rukh Khan and Gauri Khan's daughter Suhana.

Ananya Panday's  mom Bhavana and Shanaya Kapoor's mother Maheep have been friends for over 25 years. They featured in Netflix's smash hit The Fabulous Lives Of Bollywood Wives, which also featured Neelam Kothari and Seema Khan.

Shanaya, daughter of actor Sanjay Kapoor and jewelry designer Maheep Kapoor, began her career as an assistant director with the 2020 Netflix film Gunjan Saxena: The Kargil Girl, which featured her cousin Janhvi Kapoor in the lead role. She came into the limelight when she made her debut at the Le Bal in Paris in the year 2019.