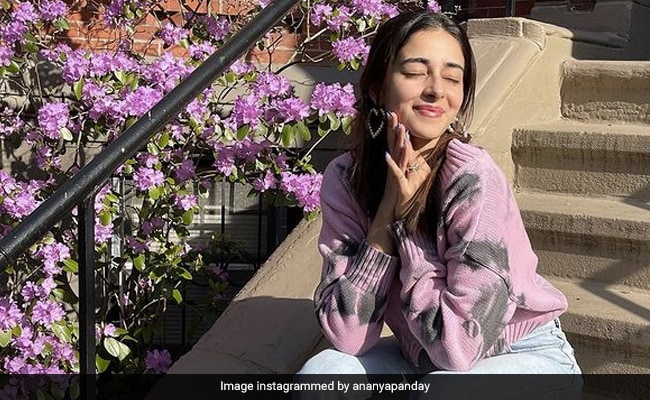 If you are having a dull day, Ananya Panday's latest entry on Instagram will cheer you up. The actress, on Saturday, posted a bunch of gorgeous pictures of herself basking in the sun, surrounded by different flowers. She picked a pink and black sweater and jeans for her photoshoot. Ananya, who was last seen in Khaali Peeli, can be seen sitting on the stairs of what appears to be a building while posing for the camera. She completed her look with heart-shaped earrings and white sneakers. Sharing the pictures, Ananya Panday captioned them with these words: "Flower power." She also added several flower icons to her caption.

If you are curious about Ananya Panday's self-care routine and her flawless skin, we have a post for you. Ananya shared photos of herself with face pack on Friday and wrote: "It's never a bad idea to be kind (especially to yourself)."

In terms of work, Ananya Panday made her Bollywood debut with Student Of The Year 2, in which she shared screen space with Tiger Shroff and Tara Sutaria. The film was the sequel to 2012's Student Of The Year. She was next seen in Pati Patni Aur Woh, co-starring Kartik Aaryan and Bhumi Pednekar.

Ananya's last film was Khaali Peeli. She has a couple of films lined-up now - she will next be seen in a film opposite Vijay Deverakonda (directed by Puri Jagannadh), as well as in Shakun Batra's romantic drama alongside Deepika Padukone and Siddhant Chaturvedi.