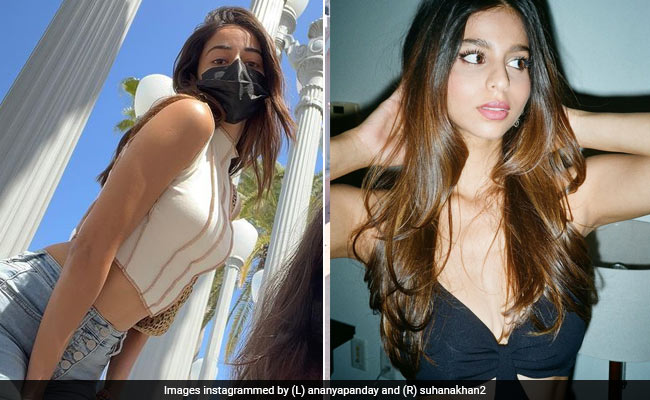 Ananya Panday, who frequently shares glimpses of her vacation diaries on Instagram, dropped a set of new pictures on the platform on Sunday. In the pictures, Ananya can be seen posing against the backdrop of magnificent view of lamp posts at an unknown outdoor location. The actress looks beautiful in the series. In the first picture, Ananya can be seen walking on the ground and has her back to the camera. In the second photo, the Pati Patni Aur Woh actress is flipping her hair. The third picture features a low-angle shot of Ananya at the location. In the last picture, she is presumably posing with her sister Rysa Pandey.

Ananya kept her caption simple. She posted a light bulb emoji as the caption. Her post has garnered more than 3 lakh likes on Instagram. We couldn't ignore her BFF Suhana Khan's comment on the pictures. Suhana wrote, "Magnificent."

Earlier, Ananya posted a few sun-kissed pictures of herself on Instagram. In the pictures, the actress can be seen posing on a staircase against the backdrop of beautiful lavender flowers. We can also see some more pictures of flowers in her post. Going by the pictures, they were presumably clicked outside India. Ananya wrote, "flower power."

Also take a look at some more pictures of Ananya from her vacations.

Ananya is Suhana's friend since childhood. Ananya is Chunky Panday and Bhavana Pandey's daughter. Rysa is Ananya's younger sister. On the other hand, Suhana is the daughter of Shah Rukh Khan and Gauri Khan.

In terms of work, Ananya Panday was last seen in Khaali Peeli in 2020. Ananya was paired opposite Ishaan Khatter in the film. The actress now has Liger and Shakun Batra's untitled project coming up.

Ananya Panday made her Bollywood debut with Student Of The Year 2 in 2019. She then appeared in Pati Patni Aur Woh the same year.