Shahid Kapoor's Pic With Misha, A Day Before her Birthday, Is A.D.O.R.A.B.L.E

Shahid Kapoor, who is currently holidaying with Mira and Misha, instagrammed an adorable picture of himself with baby Misha, a day before she turns one-year-old 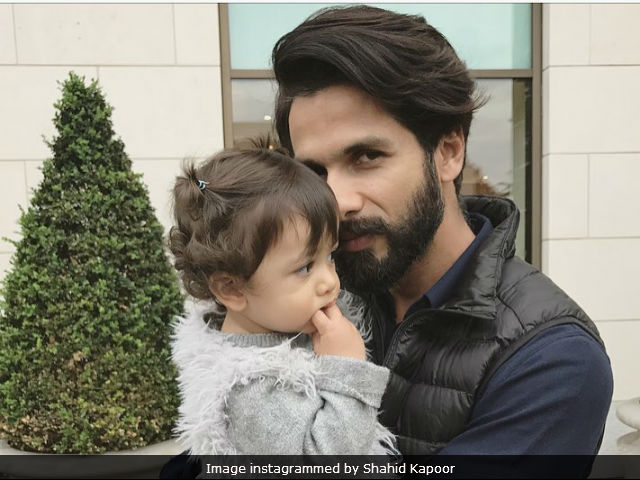 New Delhi: Shahid Kapoor is making his fans go crazy with so many adorable pictures of his daughter Misha from his vacation diaries. One such cuteness-overload picture of Misha was instagrammed by Shahid Kapoor today, a day before his daughter turns one-year-old. Shahid can be seen carrying Misha in his arms and posing for a perfect picture while baby Misha seems to be chilling completely. Misha is looking cute beyond words in the picture and not to be missed are her extra-cute pony tails. In the pic, Misha can be seen wearing a beautiful grey sweater and nibbling on her fingers. Isn't that icing on the cake? Well, Misha is all set to celebrate her first birthday tomorrow with her parents. "Just about one," Shahid Kapoor wrote.

Recently, the Shaandaar actor also shared a heartwarming picture, in which Misha was sandwiched between her parents. Shahid seems to have the 'best time' with his family during the holiday.

Promoted
Listen to the latest songs, only on JioSaavn.com
Shahid and Mira got married in July 2015 and Misha was born on August 26 last year.

Shahid Kapoor, who was last seen in Vishal Bhardwaj's Rangoon, co-starring Kangana Ranaut and Saif Ali Khan, is currently prepping for Sanjay Leela Bhansali's Padmavati. The film is based on the legend on Rani Padmini of Chittor, who performed jauhar when the fort of Chittor was invaded by Alauddin Khilji. Deepika plays the titular role while Shahid will be seen as her onscreen husband. Ranveer Singh plays Alaudin Khilji. Padmavati is expected to release later this year.