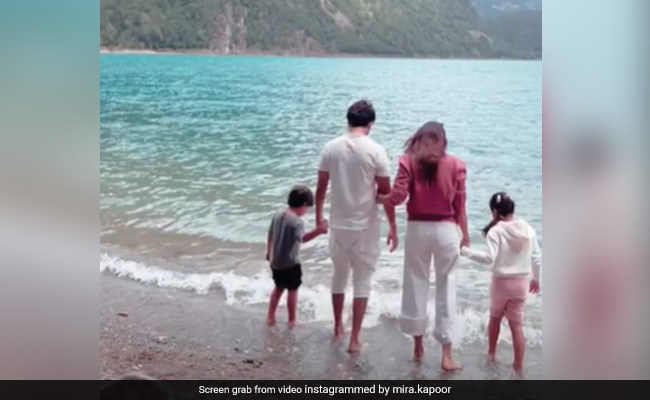 Shahid Kapoor with his family in Switzerland (courtesy: mira.kapoor)

Mira Rajput dropped the perfect family picture on Instagram. Shahid Kapoor, his wife and their kids - Misha and Zain - are enjoying a blissful vacation in Switzerland. On Friday, Mira posted a picture with Shahid, Misha and Zain in which the four of them are holding hands and looking at the sea and the mountains. Both Shahid and Mira have rolled up their jeans to enjoy the sea. Over the past few days, Mira has been sharing lovely pictures from the getaway and leaving giving fans a glimpse of the Kapoor family's relaxing holiday. A few days ago, the 27-year-old social media influencer posted beautiful pictures of the mountainside, accompanied by her "serial photo bomber", Zain. In a series of images, Mira wears a yellow pullover with blue jeans and a hat with Zain trying to distract her from posing. In the caption, she wrote, "Haseen Vaadiyan (Beautiful valleys)" and added the hashtag "serial photo bomber is back".

Shahid Kapoor often takes his family on a vacation between his work schedules. The actor was seen last in Jersey, the Hindi remake of the 2019 Telugu film. The actor featured alongside Mrunal Thakur and Pankaj Kapur. Helmed by Gowtam Tinnanuri, the film revolves around the life of a former cricketer who returns to the field upon his son's wishes to buy a jersey t-shirt.

Meanwhile, Shahid has signed up a web series for director duo Raj and DK. It is titled, Farzi.