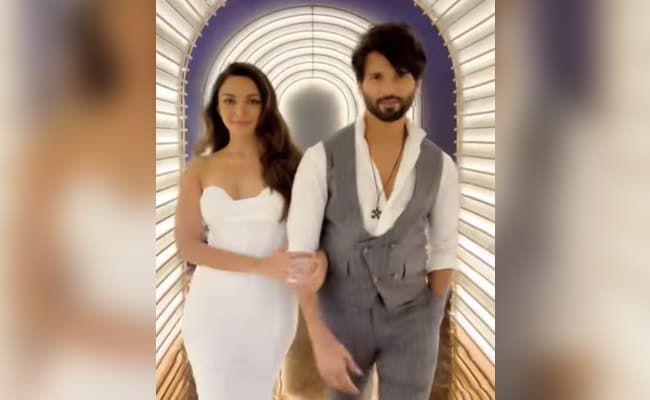 Kabir Singh's lead pair Shahid Kapoor and Kiara Advani, who played Kabir and Preeti in the 2019 film, reunited on Tuesday as the romantic drama clocked three years. Helmed by Sandeep Reddy Vanga, the film was a Hindi remake of the Telugu blockbuster Arjun Reddy, which brought Vijay Deverakonda national acclaim. Shahid Kapoor shared a video with Kiara on Instagram, in which the duo wore stylish outfits. While Shahid wore a grey pinstriped jacket with pants and a white shirt, Kiara looked gorgeous in a white gown. The post featured Shahid and Kiara walking down against a well-lit background.

In the caption, Shahid wrote, "3 years of Kabir and Preeti," and added the hashtag "Kabir Singh". Kiara, too, shared the same post on Instagram.

Kabir Singh was a blockbuster hit in 2019 and marked Shahid and Kiara's first collaboration. It was Sandeep Reddy Vanga's debut Bollywood film after Arjun Reddy. Kabir Singh revolved around a surgeon who found relief in drugs and alcohol after his girlfriend married someone else.

Meanwhile, Kiara is gearing up for the release of Jugjugg Jeeyo, which also features Anil Kapoor, Varun Dhawan, Neetu Kapoor and Prajakta Koli. Directed by Raj Mehta, the family entertainer will release on June 24. Other than that, Kiara has Govinda Naam Mera next with Vicky Kaushal and Bhumi Pednekar. She will also feature in a Telugu film opposite Ram Charan.

On the other hand, Shahid Kapoor was seen last in Jersey, a Hindi remake of the 2019 Telugu film by the same name. Helmed by Gowtam Tinnanuri, the sports drama also featured Mrunal Thakur and Pankaj Kapur. Next, Shahid will star in a web series, to be directed by Raj and DK.