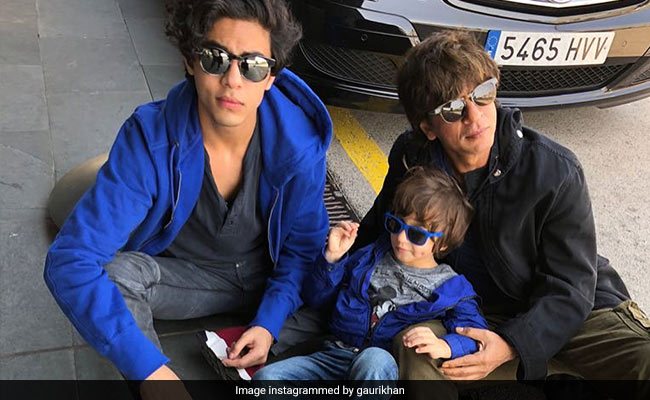 Shah Rukh Khan and son Aryan have been cast as Mufasa and Simba in the Hindi dub of Disney's upcoming live-action version of The Lion King and Twitter is raising the N-word. Simba is the central character of The Lion King, reflected in the fact that actor-rapper-producer-writer and icon-in-the-making Donald Glover voices him in the film (James Earl Jones reprises his role as Mufasa, Simba's father who dies early into the film but remains a guiding force in his troubled son's life). And Aryan Khan, best-known for being SRK's son, plays him in the Hindi dub. Wait, what?

In 2004, Aryan, then seven-years-old, dubbed for Dash in The Incredibles - Shah Rukh Khan voiced Mr Incredible - and that's pretty much his only experience till date, barring a scene in Kabhi Khushi Kabhie Gham in which he appears as the toddler version of his dad's character. These credentials or lack of them are quite enough to convince Twitter that Aryan's casting in the lead role of a remake of a beloved classic is because of Bollywood's besetting sin - nepotism.

So like nepotism, but now in Disney cartoons. #TheLionKing#Disneyhttps://t.co/0Tm1SSNTyp

#TheLionKing or the king if nepotism

When even Disney knows that Bharat mein #TheLionKing jaisi strong script bechne ke iye bhi nepotism ka sahara lena padega.
Yes, we deserve it.
Also, no problem that Aryan wants 2 do films, but handing him TLK on a platter to debut is what nepotism is all about. https://t.co/xeLiN8DOXH

Twitter has several alternate suggestions for the Hindi voice of Simba - Ranbir Kapoor is top choice. Also, sorry Shah Rukh Khan but the Internet seems to prefer Amitabh Bachchan for Mufasa. And could we get Rishi Kapoor as Pumbaa please?

However, this is The Lion King we're getting and Twitter also has some ideas on the customized wisdom this Mufasa will give his Simba:

Indian stars seem only too happy to dub for Hollywood blockbusters, from Ranveer Singh in Deadpool to Varun Dhawan in Captain America: Civil War. In 2016, Disney struck gold with an all-star voice cast for the Hindi version of The Jungle Book - Om Puri and Irrfan Khan voiced Bagheera and Baloo and Priyanka Chopra dubbed for Kaa.

The Lion King, out on July 19, is directed by Jon Favreau who also directed The Jungle Book. James Earl Jones is the only member of the original cast to return; Chiwetel Ejiofor takes over from Jeremy Irons as the dastardly Scar, Beyonce, Seth Rogen and John Oliver are Nala, Pumbaa and Zazu, and Black Panther alumni John Kani and Florence Kasumba appear as Rafiki and one of the hyenas.

Inside Sussanne Khan's Vacation With Hrithik Roshan And The 'Modern Family'