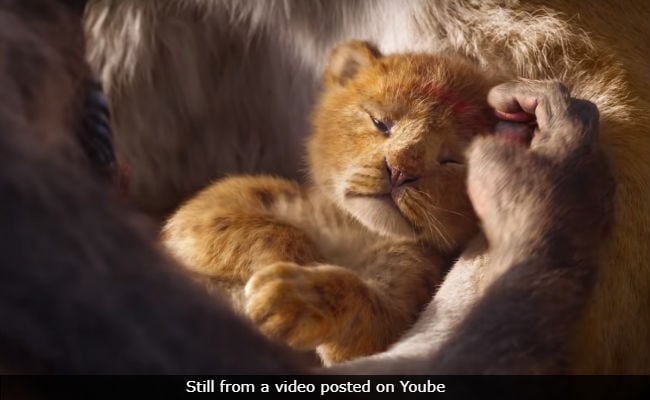 Even within Disney's current circle of lively remakes, Simba is stirring high emotion.

Hollywood has been remaking beloved classics with new digital bells and whistles for years now, buffing up the Grinch with a CGI sheen and turning Mowgli's jungle into a pixelated forest. But just a quarter-century after The Lion King hummed its way into the hearts of several generations, fresh footage of a blue-screen return to Pride Rock is leaving some viewers a bit shook.

Over the Thanksgiving holiday, Disney released the first trailer for next year's Lion King remake - which trades in the 1994 original's 2-D animation for CGI re-creation - and after more than 224 million views within the first day, the debate was sparked: Just how is this a "live-action" film when everything on the screen looks like a painted pixel?

Some viewers tweeted their confusion over the trailer - perhaps expecting a so-called live-action remake of "The Lion King" to be more in the vein of the costuming in Julie Taymor's smash Broadway musical.

And the high degree of cinematic similarity prompted some users to post shot-by-shot comparisons of the original and the remake.

And when Aquaman director James Wan tweeted his appreciation of the trailer, his use of "live action" spurred further opinions about just what to call Disney's latest re-creation of an iconic property from its gilded vault.

Amid it all, there seems to be a public need to put a name to such pioneering hybrids in filmmaking. And the talk will eventually pivot to awards: How will movie jurors classify a creative animal like The Lion King, which is due out in July?

A related debate arose when Avatar was released, with the Visual Effects Society honoring James Cameron's 2009 epic for, among other trophies, "animated character in a live-action feature motion picture." As the Oscar-nominated writer-director Dean DeBlois (Mulan, How to Train Your Dragon) told The Washington Post at the time: "Avatar has bridged the gap so much between what live-action did and what animation traditionally did." He added, "There's nothing you can't do in terms of creating a performance."

Ever since, so much of the conversation around the blurring of CGI "motion-capture" and animation has centered on the human inside the digital skin. Some filmmakers draw a distinction when an actor is delivering a performance that gets a CGI paint job - as Andy Serkis so often does - as opposed to a person merely being a model for the animator's hand.

Jon Favreau, the director of the Lion King remake (which stars Donald Glover, James Earl Jones and Beyonce Knowles-Carter), has naturally walked down this valley before, with his update of The Jungle Book. In 2016, Favreau's remake of that Disney cartoon classic relied largely on CGI animation - animals and landscapes created in computer - but the central figure of Neel Sethi as a live-action Mowgli gave viewers one tether to a real, seemingly unpainted performance.

Now, however, with Favreau creating an all-animal tableau, some viewers seem unmoored by the lack of a human face when classifying his Kingdom.

Rob Legato, The Lion King's VFX supervisor, who also worked on Avatar, told the Hollywood Reporter that he didn't consider the remake an "animated movie" because of how Favreau incorporates VR tools - such as exploring cinematic angles from different characters' viewpoints - into the "rules" of traditional live-action filmmaking. (He also said that Jungle Book felt "like a traditionally shot live-action movie, though it was filmed entirely on a bluescreen stage," THR wrote last year.)

Either way, with so many tools at play, perhaps there will eventually be no need to demarcate the difference between films that rely on CGI-painted performance and animated films that employ photorealistic effects.