Shah Rukh Khan thought of spending the weekend with his son AbRam by watching "something new" on Netflix but ended up leaving the little one disappointed. Guess what did he do? Shah Rukh Khan shared a hilarious incident on Sunday and revealed his AbRam's epic reaction to his David Letterman's interview after the actor promised him "something new." Instagramming a screenshot of the interview's banner on Netflix, Shah Rukh Khan wrote: "So you finally settle down on your soft bed, with your softer littlest one and say, 'Let's watch something new today... On Netflix ...' and this banner pops up! And the littlest one quips... 'Papa, it's not new... it's just you!' Well..."ROFL!

While AbRam was not that interested in his father's latest interview, a lot of celebrities praised Shah Rukh Khan and called his interview "the best" of the David Letterman's series. Cyrus Sahukar wrote: "You were amazing, the best interview of the series" while television actor Karan Tacker commented: "Loved listening to you sir!" Neha Dhupia, Fatima Sana Shaikh and Tisca Chopra left heart emoticons in the comments section. 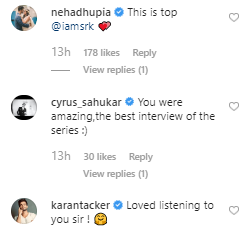 A screenshot of Neha, Cyrus and Karan's comments on Shah Rukh Khan's post.

Shah Rukh recently appeared on David Letterman's talk showMy Next Guest Needs No Introduction and talked about his life, his wife Gauri Khan, his kids Suhana, Aryan and AbRam and his philanthropic Goals among other things. During the interview, he said that he has discovered a new way to spend time with his children - Cooking. That's sweet, Shah Rukh Khan! Read more highlights from his interview here.

On the work front, Shah Rukh Khan was last seen in Zero. He is currently on a break from films.