My Next Guest Needs No Introduction With David Letterman: Everything you need to know about the episode featuring SRK 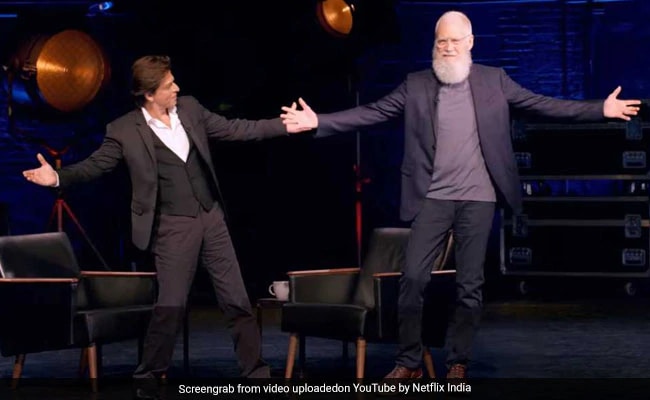 My Next Guest Needs No Introduction With David Letterman: SRK with the host. ( Image courtesy: YouTube)

Hey folks, the episode of David Letterman's talk show My Next Guest Needs No Introduction With David Letterman aired on Netflix on Friday and we loved every bit of it. Mr Letterman was out of words (literally), when he introduced Bollywood superstar Shah Rukh Khan on the show. In a BTS video, Mr Letterman said, "You don't even know, eh, may be you do know, but this is eh, I don't know, you know what I'm talking about." The moment SRK stepped into the studio, the audience went insane and started cheering for him incessantly. Mr Letterman listed that this was "perhaps the biggest ovation" that he's had in the series." TBH, we are not surprised at all, keeping into consideration the massive popularity of the actor all across the globe. The topics that were discussed during the episode ranged from SRK's childhood in Delhi, to the way he deals with stardom, how he met the love of his life Gauri Khan, to his thoughts on American President Donald Trump (yes, even that). We have picked out the 10 highlights from the episode. You can thank us later.

Shah Rukh Khan never fails to amaze us and that is exactly what he did throughout the course of his episode. During the show, he revealed that he often likes to refer to himself as the "Indian equivalent" of Hollywood actor Tom Cruise. He explained that once an article published in the TIME magazine referred to him as the "Indian equivalent" of the Mission Impossible star, after which he started introducing himself in that manner. "That thing stuck with me. So anytime somebody asks me, I just take out that magazine and say, I am the Indian equivalent of Tom Cruise."

Did You Know SRK Wanted To Be An Engineer And A Journalist?

Talking about his early days of education, Shah Rukh Khan revealed that he aspired to be an engineer before becoming an actor. Shah Rukh said, "I realised that I cannot be an engineer, so I became an actor." He explained that he studied Economics for graduation and he did his masters in Mass Communication because he wanted to be a journalist.

How SRK and His C-Gang Found Gauri On The Beach

During the show Shah Rukh Khan spoke about his squad, which he called "C-Gang." The actor revealed that at the age of 15, he went to Mumbai with his gang to look for Gauri Khan, who had moved there. The catch was that he didn't know anything about her other than the fact that she liked to swim. So, in order to find her, he hit the beach and thought he could find her there. Much to his surprise, there were several beaches in Mumbai and SRK did not know that. So ,he visited the beaches along with his gang and after much ado, he finally heard Gauri's voice and she asked him, "What are you doing here?" Now that's one iconic story. Isn't it?

Why SRK Hates Riding A Horse

From romance to comedy, to thrillers and even action films, SRK can do it all and how. But if there's one thing that the actor doesn't like doing is riding a horse, or any animal for that matter. The actor, who had a horse-riding sequence in the 2001 film Asoka, recalled how he had a tough time dealing with the horse. SRK revealed that the horse would not start at first and when it did, it just wouldn't stop and the actor had to ride it for a couple of minutes. This explains why you wouldn't see the actor riding a horse in most of his films.

Shah Rukh Khan is a busy man but he always manages to spend time with his children and lately, the actor has discovered a new way of spending time with his children AbRam, Suhana and Aryan. The actor is learning how to cook and his specialty is Italian cuisine. The actor knows how to cook Pasta aglio e olio, pesto, grilled pepper chicken and risotto. We got a glimpse of SRK's culinary skills during the episode, when he hosted David Letterman at his house Mannat in Mumbai and cooked some food for him.

When Mr Letterman asked the actor for his views on the current American President Donald Trump, the actor said, "Let me say it as politically correct way as possible. We look up to America. As Indians, we aspire to be there. But we are like okay with you. Maybe you guys deserve it." SRK's answer surely cracked David Letterman up.

The Actors Who Inspired Him The Most

Shah Rukh Khan might be a source of inspiration for many, but do you which actors inspired SRK? Michael J Fox and Peter Sellers are the actors who inspired him to take up acting. "The way he used to use space. He was so sweet and funny and he looked eternally youthful and extremely inspiring. But Peter Sellers affected me the most." Now, we didn't know that.

Why SRK's Son Aryan Khan Won't Be An Actor

Shah Rukh Khan, who recently dubbed with his son Aryan for the Hindi rendition of The Lion King, revealed that Aryan will never be an actor. "He doesn't have what it takes to be an actor and he realises that too but he's a good writer. I think wanting to be an actor has to come from within. Something you really need to do and find a set of skill that helps you do it and learn it. But I think I realised it from him when he said that to me. He came to me and said, 'I don't think I want to act.' His issue was - which is think is practical and honest - he said, 'Every time I'll be compared to you... and I don't want to be in that position," SRK said.

SRK's interaction with David Letterman on My Next Guest Needs No Introduction With David Letterman was not just about fun conversations. The actor also talked about how he has extensively been working towards the problem of acid attacks and wishes to make a change as much as possible.

Shah Rukh Khan Is On Top Of David Letterman's List

Mr Letterman, who has hosted Former US President Barack Obama, actor George Clooney and Nobel laureate Malala Yousafzai, among many other big names on his show, signed off the episode, saying, "After each of these sessions, I feel and think that it was a very smart and lovely conversation and, maybe, you will be on the top of the list." Shah Rukh Khan was obviously moved by David Letterman's comment.

You can watch Shah Rukh Khan's interview with David Letterman on Netflix.