Shah Rukh Khan wrote, "Nearly three decades and dearly three kids old. Beyond all fairy tales I tell, I believe this one." 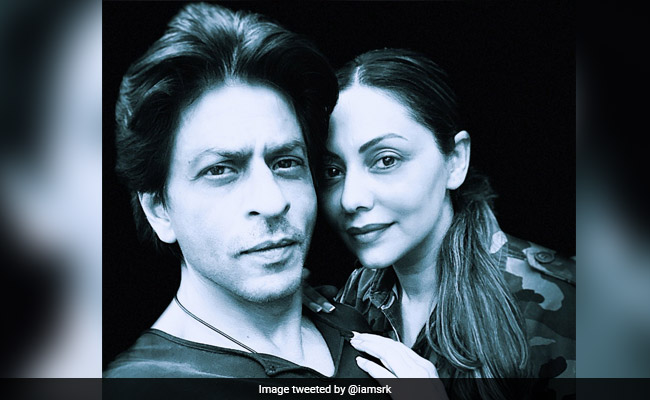 On their 28th marriage anniversary today, actor Shah Rukh Khan posted a heartwarming note for his wife Gauri Khan in social media. 0f his companionship with Gauri, the 53-year-old actor said that it "feels like forever and seems like yesterday." Sharing a picture of the couple, SRK wrote, "Feels like forever, seems like yesterday... Nearly three decades and dearly three kids old. Beyond all fairy tales I tell, I believe this one, I have got as beautiful as beautiful can be!" Shah Rukh's love note for Gauri melted many hearts on Instagram. Fans of the Raees actor wrote compliments such as "adorable couple" and "couple goals" in the comments thread while some simply congratulated the couple.

Feels like forever, seems like yesterday....Nearly three Decades and Dearly three kids old. Beyond all fairy tales I tell, I believe this one, I have got as beautiful as beautiful can be!

Shah Rukh Khan married Gauri (nee Chhibber) on this day in 1991, a year before his Bollywood debut with 1992 film Deewana. Shah Rukh and Gauri met when they were studying in Delhi University and they got married after dating for almost six years. Meanwhile, Gauri Khan is now an interior decorator and she owns the plush Gauri Khan Designs in Mumbai. She has given a makeover to several suburban Mumbai restaurants and celebrity homes over the years.

In a media interaction, Gauri complimented Shah Rukh for being a 'great father and husband' and added that being his wife 'there are only positives.' She was quoted as saying, "Even if there are some negatives, I have to brush it aside and the reason is very simple because he helped me while launching Gauri Khan Designs, so, he is very important to me. Jokes apart, he has done a lot for our family. He is a great father and husband. I have to say that there are only positives being his wife and I would not like to share anything negative."

Shah Rukh Khan and Gauri are parents to sons Aryan, 21, and AbRam, 6, and daughter Suhana, 19. Aryan and Suhana are currently studying films abroad while AbRam stays with his parents in Mumbai.