Can you guess what Gauri Khan's favourite part of the outfit was? 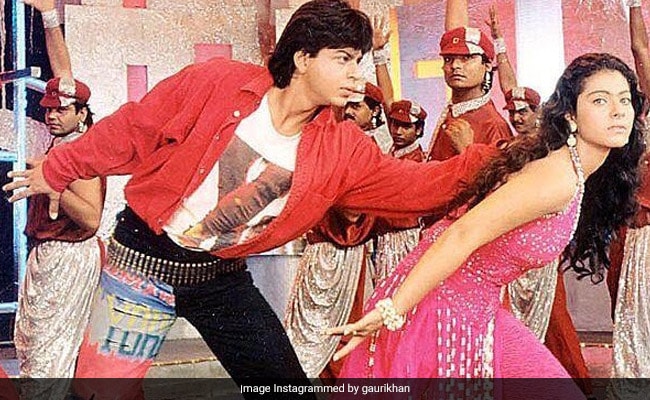 Shah Rukh Khan and Kajol in a still from Baazigar. (Image courtesy: gaurikhan)

Don't we all have that one throwback picture that makes us wonder about how long we have come in life, especially when it comes to sartorial choices. The reason we brought this up today is because Gauri Khan had a similar moment and she decided to share it with her Instafam. On Thursday evening, the 48-year-old interior decorator posted stills from the song Yeh Kaali Kaali Aankhen from Shah Rukh Khan and Kajol's 1993 super hit film Baazigar and she shared an interesting backstory about SRK's quirky outfit in the song. Gauri's designing skills were not just confined to designing homes as she put together SRK's look for the song. FYI, the actor could be seen wearing a legwarmer tee (Gauri's favourite) with hand-painted jeans in the picture. The bullet belt and the bright red shirt certainly added an edge to the actor's look.

Sharing the throwback picture on her Instagram profile, Gauri Khan tagged SRK and Kajol and she wrote: "Can't believe I designed this look in the 90's... Those jeans, legwarmer tee, bullet belt and a red shirt thrown over. The hand-painted jeans were my favourite. Gauri Khan Designs has come a long way! Major throwback."

Can't believe I designed this look in the 90s ... Those jeans, #legwarmer tee, bullet belt and a red shirt thrown over. The hand painted jeans were my favourite. #Gaurikhandesigns has come a long way! Major throwback.. @iamsrk @kajol

Baazigar, a crime-thriller directed by Abbas-Mustan, showcases the story of a young boy Ajay (played by Shah Rukh Khan), who, in order to seek revenge for his father's death, decides to destroy a business tycoon and his family. The film also featured Shilpa Shetty.

Gauri Khan has redecorated homes for several Bollywood A-listers such as Alia Bhatt, Varun Dhawan, Jacqueline Fernandez, Ranbir Kapoor and Karan Johar among others. She has designed restaurants like Arth and Sanchos and she also runs a store named Gauri Khan Designs in Mumbai. Other than that, Gauri Khan is also a film producer.