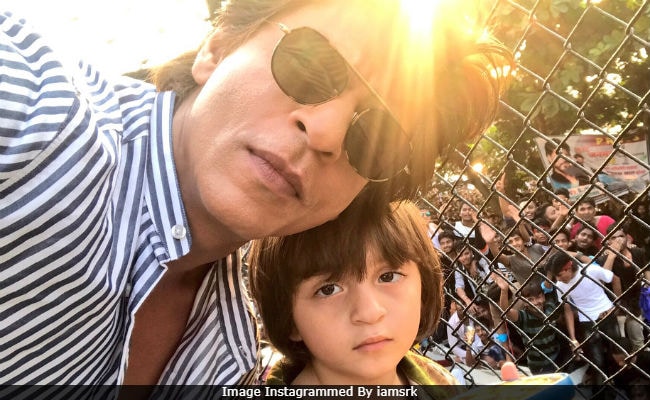 New Delhi: A late post for AbRam's birthday arrived this morning from his dad Shah Rukh Khan and it is adorable beyond words. AbRam turned 5 on Sunday. In the picture posted by SRK, little AbRam poses for the camera, and the caption reads as, "My sunshine turns 5 years today but he thinks he is 9. Please don't tell him otherwise if you meet him. Children should hear their own music, sing their own songs & believe in their own little dreams & yeah, hug their papa a lot." (Shah Rukh Khan, that's so cute). AbRam's picture is viral now and has got close to 5 lakh likes (and counting). Pakistani actress Mahira Khan (SRK's Raees co-star), Union Minister Smriti Irani, Farah Khan, Sussanne Khan, Ekta Kapoor and several others have liked the post.

My sunshine turns 5 yrs today but he thinks he is 9! Please don't tell him otherwise if u meet him. Children should hear their own music, sing their own songs & believe in their own lil dreams...& yeah, hug their papa a lot..

AbRam's mom Gauri had posted two pictures with him and wrote, "Happy birthday, my gorgeous."

AbRam is Shah Rukh Khan and Gauri's youngest child. The couple, who married in 1992, are also parents to son Aryan, 20, and daughter Suhana, 18. Aryan is studying films in California while Suhana is completing her higher studies.

Promoted
Listen to the latest songs, only on JioSaavn.com
Suhana turned 18 last week and her doting parents had filled up social media with these posts.

Like all daughters, I knew you were always meant for flying...and now u can also legally do what u have been doing since u were 16...!! Love u.

Gearing up for a birthday bash... Thanks @karanjohar Pic credits: @avigowariker

Shah Rukh Khan, 52, is busy with Zero, his next film with Anushka Sharma and Katrina Kaif. The trio are co-stars of 2012 film Jab Tak Hai Jaan. He is also the co-owner of Indian Premier League (IPL) team Kolkata Knight Riders (KKR). The IPL finals were held last night.