Earlier this month, director Aanand L Rai revealed that the much-awaited film is most likely to release next year 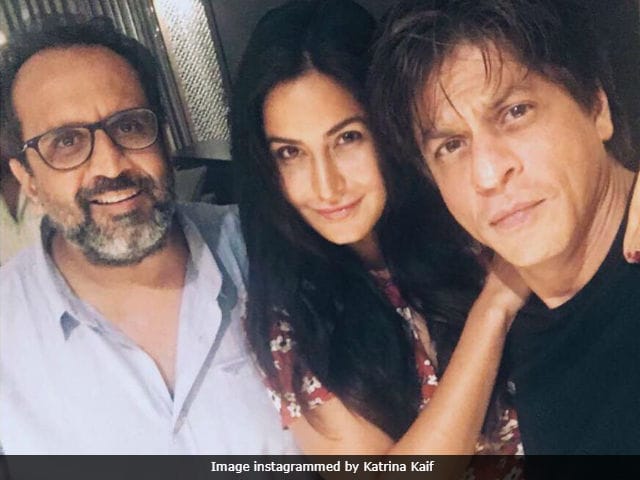 Katrina Kaif from the sets of the film (courtesy katrinakaif)

New Delhi: Shah Rukh Khan's film with Aanand L Rai is making steady progress and we are glad to have been receiving updates from the stars of the film. After Katrina Kaif posted a picture from the sets of the movie on Instagram, Shah Rukh shared another update about the film's schedule. Speaking to reporters at an event recently, the 51-year-old superstar said Anushka is yet to join the sets of the yet untitled movie and she's expected in a day or two. The shooting of the movie is taking place across selected locales. "Aanand L Rai's film shooting is going on. Katrina Kaif has joined us and Anushka Sharma will join us in a day or two. Shooting is going on at various places. It is going well," news agency IANS reported Shah Rukh as saying.

Earlier this month, director Aanand L Rai revealed that the much-awaited film is most likely to release next year. "I will take another year and a half. We are targeting 2018 December. Nothing has been decided yet but we will announce the title very soon," he had told IANS.

Katrina joined the sets of the movie last week, when she Instagrammed a team photograph with Shah Rukh and the director in tow: "First day of shoot with the incredible Anand Rai and Shah Rukh Khan ( super excited to be shooting with him after 5 years ) Here's to putting our hearts and souls into creating a wonderful movie together." Shah Rukh and Katrina are co-stars of 2012 movie Jab Tak Hai Jaan, which also starred Anushka Sharma.

VFX and special effects will play a significant role in the much anticipated movie, in which Shah Rukh plays the role of a "vertically challenged" character.

Promoted
Listen to the latest songs, only on JioSaavn.com
Katrina Kaif will next be seen in Tiger Zinda Hai while Anushka is also looking forward to the Sanjay Dutt biopic and Pari. Both Shah Rukh and Anushka were last seen in this year's Jab Harry Met Sejal.