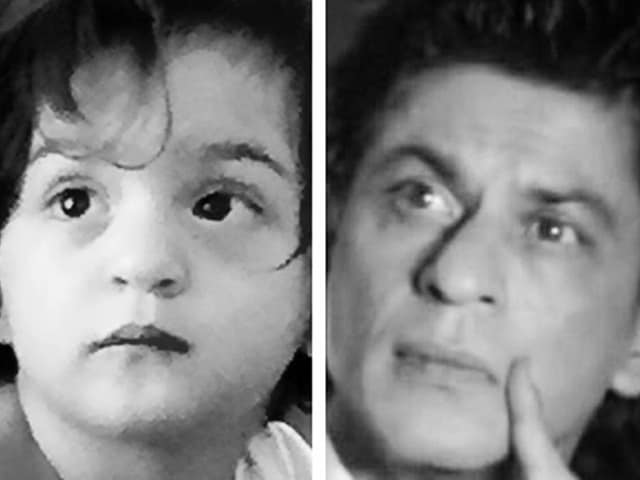 Superstar Shah Rukh Khan certainly isn't shy when it comes to putting himself out there on Twitter. Unlike many other more reticent colleagues, SRK has never considered his family or personal life off-limits as a subject for his social media accounts. SRK's latest tweet is a split screen of his 'Murphy Baby' - son AbRam - and himself. (Also read: This Happened: Shah Rukh and Deepika Did the Lungi Dance For a Little Fan)

& before the tweets lead to an assumption of a troubled mindset, this pic of my Murphy baby & me...as they say "awww" pic.twitter.com/sFJ9WurK6z

AbRam is looking rather pensive in the picture, just like the King Khan himself in the adjacent frame.

Here's why one would assume a 'troubled mindset.' The tweets preceding that of the 'Murphy Baby' were excerpts from the poem The End of a Discussion With a Prison Guard by Palestinian poet Samih al-Qasim.

(1). Through the eyehole of this little cell of mine I can see the trees all smiling at me, The rooftops crowded with my family,

(2) The windows breaking into tears for me & prayers for me. Through the eyehole of this little cell of mine I c ur bigger cell just fine.

Poem is by Samih Al Qasim....Titled...The End Of A Discussion With A Prison Guard.

AbRam made his official debut on Twitter last year when his famous father tweeted a photo of them together as an Eid gift to fans who had been clamouring to see SRK's third-born. AbRam has since been spotted in the end credits of 2014 blockbuster Happy New Year and on the sets of SRK's next film Fan.

AbRam is the youngest of Shah Rukh and Gauri Khan's three children. He will be two on May 27.