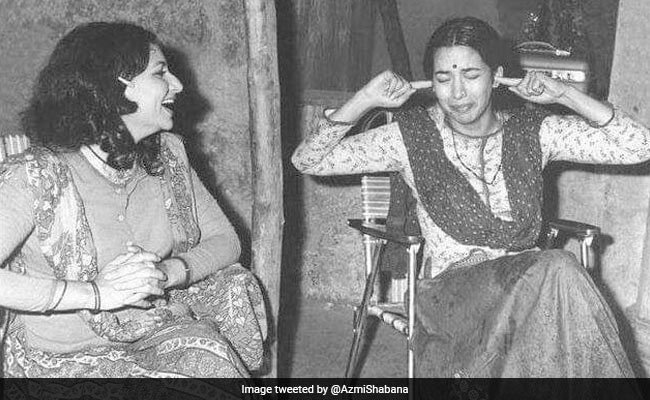 Actress Shabana Azmi dug up a million-dollar photo from her films archive, in which she features with actress Sharmila Tagore on the sets of their 1982 film Namkeen. Sharmila Tagore is laughing her heart out while Shabana Azmi, trying to cover her ears, wears an expression which will make you ROFL. "Goofing about on the sets of Namkeen," Shabana Azmi captioned the post. The film directed by Gulzar also featured Sanjeev Kumar, Kiran Vairale and Waheeda Rehman. Back to Shabana Azmi's post, which generated curiosity among many including Twinkle Khanna, who asked Shabana Azmi, "I want to know what was so salacious that you are refusing to let it enter your system!!"

I want to know what was so salacious that you are refusing to let it enter your system !!

Shabana Azmi started her career in Bollywood with Ankur, for which she won the Best Actress National Award. She went on to star in films like Arth, Khandhar, Paar and Godmother - she won Best Actress of all these films. Shabana Azmi has starred in several critically-acclaimed films like Swami, Shatranj Ke Khiladi, Masoom and Parvarish to name a few.

In recent years, Shabana Azmi played the antagonist in Jazbaa, headlined by Aishwarya Rai Bachchan. She played Sonam Kapoor's onscreen mother in Neerja and she co-starred with Juhi Chawla in Chalk n Duster.

Shabana Azmi is a Film and Television Institute of India (FTII) alumna and she is the daughter of poet Kaifi Azmi, who also doubled as a lyricist in Bollywood, and actress Shaukat Kaifi, who is best-known for her roles in Garam Hawa and Umrao Jaan.